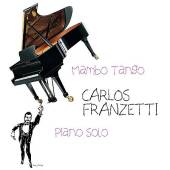 If you are a virtuoso like Carlos Franzetti, there may be several ways to work a piano when performing a solo, or indeed performing solo on this grand instrument. But then again, if you are Carlos Franzetti you can use your God-given abilities to make the instrument come alive to the full range of its myriad melodic, harmonic and rhythmic possibilities. So now the piano is not just a lead voice but a voice with symphonic possibilities. It can replicate the other voices that are bowed, plucked; blown and struck. When this happens, the aural result is staggering. And that is what is presented on Franzetti's innocuously titled Mambo Tango.

The Argentinean-born musician, better known as a composer and arranger in the multicolored world of transcendent jazz/Latin/symphonic work, knows well just how far a piano can be pushed. He writes and arranges like Duke Ellington and his instrument is the orchestra. So when his right hand proffers the melodic line, his left is sometimes several other instruments—basses, drums, strings or woodwinds. Not literally, of course, but in the uncanny use of dynamics, tonal color and harmonic textures. So in song after song, Franzetti can bring to life a veritable orchestra from a mere solo piano, simply by thinking "multi-instrumentalist" while playing. It is not just in the arrangements, but the way his fingers move as well.

Nowhere is this more evident than on Bill Evans classic, "Waltz For Debbie." Franzetti's version, quite familiar from the melody, is quite different from the Evans versions, which were introverted, almost brooding. Franzetti's approach is extroverted, exuberant, diametrically opposite to the Evans version while still maintaining the integrity of the song. There is also much more in the wide aural landscape of the record. This is a journey that seemingly carries the pianist on a swart ship from Cuba to Argentina, and from Brazil to the Bronx. Throughout the journey the energy is palpable—almost as vibrant as the gushing of blood through a body pulsating with improvisational skill, the classist's dynamics—glued together by gentle command of the idioms and idiosyncrasies of the music's extensive topography.

The fingers on Franzetti's hands dazzle. They sometimes seemingly run away at many speeds at once; the fingers on his left hand following the right and vice versa. His feet open and close the damper. Sometimes the fingers strike several notes at once with symphonic intensity, as the songs traipse and rumble. At other times, as in "Jazz Photographs," they do both, stopping just briefly to explore, with wispy longing, the song's narrative nooks and crannies. At other times they dance exultantly through a flood of harmonic inventions, as in "Gary's Waltz." And then there are the filigreed altered chords on "Milonga Del Adios" and the manic revelry of "Carnival" and "Mambo Tango."

This is a fine first solo record, one filled with aural fibrillation that thrills to no end.