By CHRIS MOSEY
October 5, 2018
Sign in to view read count 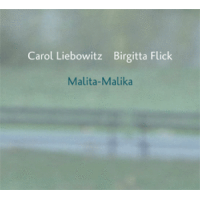 Carol Liebowitz is a pianist based in New York City. Birgitta Flick lives in Berlin and plays tenor sax. They met in 2010 at a jazz club in Berlin and, ever since, have played together now and again. Their music is free, not particularly melodic and occasionally downright difficult to listen to.

"Whether it is a spontaneous free improvisation or a standard that dates back nearly a century—to us it's all one," they boldly proclaim in the liner notes, "We're guided by the spirit and the intuition of the very moment the music comes into being, a continuity of feeling and inspiration each time anew."

Malita-Malika was recorded in 2017 when Flick spent a month in New York City, "allowing us to deepen our connection in an intensive way." It was subsidized by the United States Senate Department for Culture and the City of Berlin.

The opener, "Moon," paints a bleak picture of Earth's satellite—dark, crashing chords from Liebowitz contrasting with arabesques by Frick on tenor. "Portrait" is gentler to begin with, becoming harsher as the piece unfolds.

"Visions" is introspective, Liebowitz leading the way into chaos and back out again. Then there's the title track, one of the more interesting pieces on the album, Frick waxing lyrical with delicate underpinning from Liebowitz.

"Hummingbird" provides an impressionistic and effective evocation of its subject matter, with Frick at her lyrical best. Liebowitz contributes an effective vocal on "September In The Rain" aided by fills from Frick.

She goes on to deliver a confident vocal on "You Don't Know What Love Is," making the most of Gene De Paul's telling lyric:

You don't know how hearts burn
For love that cannot live, yet never dies
Until you've faced each dawn with sleepless eyes.

It's a shame really that the album set out to be so unremitingly avant-garde. A few steps towards the musical mainstream would have made all the difference.