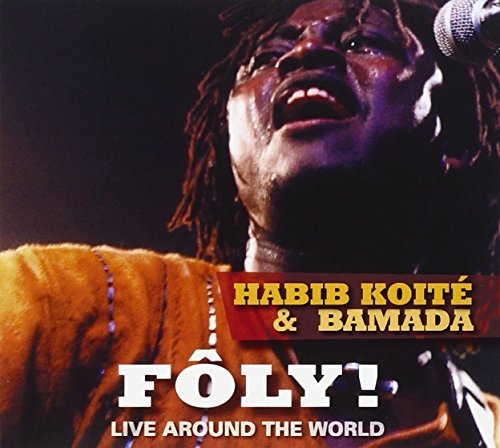 For the uninitated, the best way to understand most traditional West African music is to view it through the prism of trance. Full appreciation of tribal drumming from Ghana, for example, requires complete submission to an altered mind state where the beat of your heart blends with a pulse implied (but never explicitly stated!) by the drums. Music from Mali, while significantly different in many respects, still carries with it a strong call to meditation and dance—more so in some respects because of its predominant use of stringed instruments. These features make sense given the omnipresent role of music and rhythm in every ritual of West African life.

Habib Koité is one of the most popular musicians from Mali (and growing more so with each year), though he's not that well-known in the United States. The two-disc set Foly! presents as good an introduction as any, especially since it's fully live in every sense of the word. The subtitle here is a bit misleading, since the tracks originate strictly from European performances in 2001 and 2002, but no matter. Koité does not hesitate to flex his appreciative polyglot tongue—"Wunderbar!"—in any case.

Koité plays the guitar in a pentatonic tuning, singing in a relatively understated way, conveying emotion through subtleties in timbre and phrasing. Whatever the true meaning of these lyrics—lost to most Westerners—they almost uniformly convey a joyous sense of celebration: of music, of life, and of the human pulse. Habib Koité's most notable stylistic feature, for aficionados of the diverse genres of Malian music, is that he manages to combine regional traditions into a union that twists and turns around various axes but never settles down.

He's joined here by his long-standing group, known as Bamada: five other like-minded musicians who emphasize both rhythm (three percussion instruments) and strings (guitars, n'goni, and violin) in addition, of course, to vocals. These eighteen tracks are rather long, and best that way anyway since trance usually takes some time to enter. You realize right away that the interlocking rhythms (dansaa) provide the propulsion, but the wings come in the form of largely pentatonic reverberations at the helm. Different tunes make different use of regional harmonies (eg. "Fatma," an explicitly minor tune that betrays North African Arab influences) and styles (eg. the vivdly percussive "Nanale" and the carefully paced "Takamba").

To be honest, one of the most important reasons Habib Koité has managed to reach out to such a broad audience (both inside and especially outside Africa) is that his records are impeccably produced. The live sound here is crisp, deep, and broad; thus Foly! is no exception to the rule.

This is the most exciting and involving live record from West Africa that I've ever heard. Consider that a strong recommendation. These two and a half hours of music are barely enough.