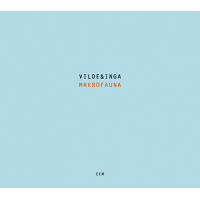 It is almost unimaginable that an established label, as the acclaimed German label ECM, will embrace the debut recording of young musicians just out of the music academy and release it as it is. But that is what happened with the Norwegian classically trained duo Vilde&Inga— violinist Vilde Sandve Alnæs, and double bass player Inga Margrete Aas. Their teacher of improvisation, vocal artist Sidsel Endresen, liked the duo's recording, sent it to ECM visionary manager and producer Manfred Eicher, who immediately expressed his interest in releasing it.

Alnæs and Aas began to play together in 2010 and both are members of the classical chamber orchestra Ensemble Allegria. Alnæs performs also as a solo improviser, and Aas plays with the trio As Deafness Increases. The duo collaborated with other like-minded improvisers as percussionist Ingar Zach, pianist Christian Wallumrod, trombonist Henrik Munkeby Norstebo, and Endresen, including in her 60th birthday surprise concert in Oslo. The duo spent the last year in Palestine, teaching improvisation and classical music.

Endresen and Eicher, obviously, were right. True to the duo's name, written without space, so is the sound of the duo. The calm, conversational, free improvised dialogues between Alnæs and Aas, recorded in the summer of 2012, blur the distinctions between the two stringed instruments. The violin and the double bass refuse to be just violin and double bass, and the duo using the outer limits of the instruments' possibilities to color new, rich sonic palettes of their own. A sound that is whole and complex as of greater ensembles, full of nuance and details, reference contemporary music, chamber jazz, and abstract, minimalist sound poems.

Vilde&Inga not only redefines the role of their instruments but suggests a new mode for a duo to explore and experiment with sounds. The improvisations begin with silence and integrate quiet, almost silent segments into the improvised process of forming the music. Slowly and gently more bits and fragments emerge, echoing each other and organically melting into new textures, liberated from conventional senses of time and space yet articulated with a commanding, compositional form, often as on "Løss," as a classical suite. The profound interplay of Vilde&Inga is telepathic. The two expand and extend each others sounds in such a natural and immediate manner that it is almost impossible to know where the duo's sounds begin or end. The improvisations are concise, intense even in its most still moments, especially on the title piece. Each improvisation discovers a distinct sonic universe, charge it with a unique feel and color, and all employs the inventive, extended techniques with great reserve and focus.