By DAN BILAWSKY
September 16, 2013
Sign in to view read count 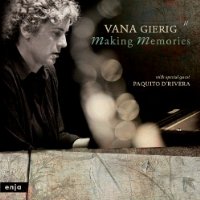 German-born, New York-based pianist Vana Gierig was making memorable music long before Making Memories came into existence. This Berklee and New England Conservatory-trained ivory tickler has been turning heads with his own work, and through sideman stints with everybody from über-hip cabaret singer Ute Lemper to violinist Regina Carter, for quite some time, but no single project has been able to properly display the true depth and breadth of his artistry; that is, no single project until this one.

Making Memories is an expansive nine song program that highlights Gierig's compositional skills and pianistic acumen. Stating that the album contains a wide range of music is a bit of an understatement; it's more accurate to say each song contains a wide range of musical ideas. The album-opening "Declaration" embodies this ideal better than any other piece, moving from graceful- and-spellbinding solo piano to firm-time, fanciful territory to hand clap-backed high jinks to carousel rides to swing; and that's only a partial, reductionist description of this eleven-plus minute performance. Almost every number that follows also contains myriad ideas.

The title track, the first of many numbers to feature Paquito D'Rivera on clarinet, is music put through a global blender, with Brazilian and Middle Eastern strains presenting as the dominant flavors. D'Rivera's next appearance, on the alluring "Morning Cadence," is equally worldly, moving from an elegant chamber-esque setting to more exotic lands. A Spanish tinge enlivens this number and several other pieces on the album, but it's never too pungent or over-pronounced. As the program continues, variety remains the spice of life. "The Spell" is friendly as can be, with a lightly flowing rhythmic current moving beneath Gierig's piano and wordless vocals. Things heat up on "The Spiraling Spell," as D'Rivera and Gierig play for, with, and against one another, and the music takes a turn toward the reflective with the strings- enhanced "Rome."

This album's greatest strengths are long gaze compositions and holistic performances which serve as reflections of the leader's musical background. Gierig's experience(s) and unquenchable thirst for musical knowledge shine through at every turn.