By BRUCE LINDSAY
February 25, 2011
Sign in to view read count 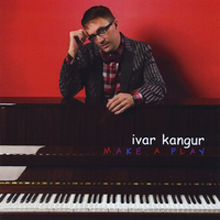 The debut recording from pianist/composer Ivar Kangur, Make A Play, is a collection of original tunes characterized by a gentleness and lightness of spirit that makes them immediately accessible and attractive. Kangur, based in Ontario, Canada, is a veteran of cover and new wave bands, and has composed scores for a number of short films. These experiences are not too much to the fore here; he acknowledges, however, the influence of Keith Jarrett and Vince Guaraldi, and the latter's style is definitely to be heard.

At just over 30 minutes in length, Make A Play is perhaps best described as a mini-album—the tunes are also brief, none breaking the four-minute barrier. Such relative brevity means that his melodies are of central importance—there's no room for lengthy improvisations. Luckily, Kangur has a good line in melodies and the best of them grab the attention within a few bars.

The most effective numbers on Make A Play are the upbeat, more playful ones such as "My Favorite Season," the pretty and insistent "Perpetual Motion Machine" and "Cabello Oscuro," or the bluesy "Blue Horizon." The 64 seconds-long "In The Quarter" is a more angular and jagged piece, suggesting that Kangur may have a more experimental side that's worth exploring. The most obviously Guaraldi-like tune is "Carnival," a simple but beautiful melody that conjures up images of crisp, fresh winter days.

Kangur overdubs bass or drums on a few tunes. This helps to give the music a bit more substance, but the parts are fairly rudimentary—the addition of a talented pair of rhythm players would have enabled him to explore and expand on these tunes. As a solo project, Make A Play is a promising debut, full of engaging and intriguing melodies. Given the chance to work with other musicians, Kangur's future recordings could really make the most of his potential.