By GLENN ASTARITA
January 7, 2010
Sign in to view read count 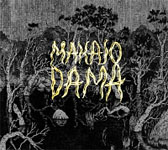 The debut from this Swedish quartet, including guest hornists and percussionists, offers a refreshing glimpse into the sometimes, demure world of progressive rock. The press verbiage draws parallels to King Crimson and Univers Zero, amid a few other cutting edge and irrefutably unique prog outfits, partly due this unit's acute fusion of thorny time signatures and use of strings. Yet Makajodama brings another compelling element into the grand schema, sparked by Mathias Danielsson's incorporation of psychedelic guitar parts. At times, they transmit an effect that conjures up notions of King Crimson meeting vintage late 1960s Blackbyrds.

Danielsson also uses keys and percussion, and performs on electric bass, yet the dual acoustic-electric strings section of cellist Karin Larsdotter and violinist Johan Klint generates a chamber rock element in spots. The program is a study in lucid contrasts via the unit's odd-metered pulses; Danielsson's sweeping electric guitar phrasings and dynamically oriented use of distortion techniques. But they sweeten the pot during "Buddha and the Camel," which features a sweet-toned strings-based melody, morphed with Tobias Wahlstedt's whimsical flute lines and the guitarist's hard-rock wah-wah maneuvers.

Makajodama integrates minimalism into its musical layout to complement softly shifting themes on "The Train of Thought," where Danielsson enamors the flow with his ethereal pedal steel guitar. They even tackle the blues with "The Girls at the Marches." This self-titled album looms as an unanticipated surprise for 2009. The musicians paint a broad panorama, swarming with subtle musings and fascinating soundscapes. Unlike many other bands of this ilk, these folks place compositional goodness as a priority while sustaining gobs of interest throughout.

Reodor Felgen Blues; Buddha and the Camel; Wolof; The Train of Thought; The Ayurvedic Soap; Vallingby Revisited; The Girls at the Marches; Autumn Suite.