By JEFF STOCKTON
September 26, 2005
Sign in to view read count 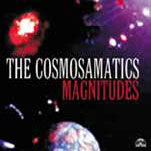 What started as a song title on a trio session for CIMP nearly ten years ago (Transcendence, 1996) has blossomed into one of the most consistent and fruitful partnerships in jazz. The Cosmosamatics (primarily alto elder statesman Sonny Simmons and multireedist Michael Marcus) dabble in bop, post bop, and free jazz, with tightly written and arranged heads and abrupt tempo shifts and twists in between.

The band has had various members since its inception, but Jay Rosen has been the constant on drums: the compositions tend to be built on percussive and driving foundations, with Rosen's steady cymbals and press rolls bearing the responsibility. Magnitudes adds bassist Tarus Mateen (of Jason Moran's trio), but he is largely underutilized. The exceptions are the tracks that feature his electric instrument, the second-line New Orleans funk of "Urban Nitemare and the second take of "Avant-Garde Destruct, sweeter and not as destructive as Take 1, which emphasizes Marcus' punishing baritone and Simmons' caustic alto. Of all their mutations, the electric bass lineup holds the most promise for continued vitality.

For some reason, Magnitudes repeats many of the compositions found on the group's last album, Three, with some slight alterations and a few notable departures. Marcus' "Uugmoanius gets things off to a swaggering start; "Avant-Garde Destruct is fast becoming the group's signature blowout; and the two takes of "Thank U Bird pay overt homage to the past master, with Simmons turning in a particularly smooth and lambent solo on Take 1. Finally, Simmons tackles "'Round Midnight solo with the profound wisdom of his years, before Marcus adds brief baritone accents. You can hear their mutual respect.