By BRUCE LINDSAY
August 9, 2015
Sign in to view read count 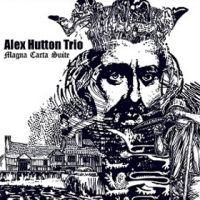 Hutton's trio is based in the UK but has an international flavor—Israeli-born drummer Asaf Sirkis and bassist Yuri Goloubev, from Moscow, complete the lineup. Hutton's suite may be short, just 39 minutes, but it combines the musical flavors of Old and New Worlds: folk, classical and jazz forms are all readily identifiable. Guest appearances by Liz Palmer on baroque flute and Liesbeth Allart on cor anglais expand the group's tonal palette to the music's benefit.

The suite doesn't focus solely on the goings-on at Runnymede in 1215. Hutton delves into earlier, and later, times. "Old Yew" is calm, stately, slow moving—as befits a tribute to a 2,000 year old tree. Palmer's subtle baroque flute adds a slight wistfulness to the melody, which Goloubev plays beautifully arco style. "Old Yew (Reprise)" is a punchier arrangement of the tune, due almost entirely to the presence of Sirkis' percussive attack. "As Sunlight Passes (Old Yew)" is the reprise with Neil Sparkes' spoken words. While Sirkis' drums added drama to the original theme, Sparkes' vocal draws the piece towards melodrama. The same thing happens to the piano/spoken word duet "Thoughts Bear Heirs To Memory"—a subtler vocal would have complemented Hutton's, lyrical, folk-tinged piano.

"June 15 1215" and "The Barons" are the tunes most redolent of English folk influence, "Gutenberg Press" probably the number that draws most directly from jazz. "Gunpowder And Compass" is the most overtly classical, based on a theme from JS Bach's "Fugue In C Minor." "King John's Hunting Lodge" and its reprise feature Allart's cor anglais—on the reprise Goloubev switches once more to arco bass, joining Allart's instrument in the suite's most moving interlude.