By GLENN ASTARITA
November 1, 1998
Sign in to view read count 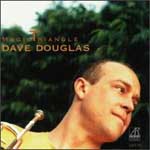 Dave Douglas has emerged as one of the premier trumpet virtuosos in the jazz business. This gifted stylist transcends many musical boundaries most notably with his String Quartet, Tiny Bell Trio, duets with Dutch drummer Han Bennink and his avante-garde Sanctuary project. Douglas' emergence on the scene has gained the attention of several record labels. Douglas records for Winter & Winter, Songlines, DIW and his latest on Arabesque records is titled Magic Triangle.

Magic Triangle is a straight-ahead, musically diverse affair featuring veteran bassist James Genus, drummer Ben Perowsky and tenor man Chris Potter. The opening track "Everyman" is an up-tempo burner which finds Douglas blowing rich melodic textures over the top. "Everyman" serves as a good opening statement for this recording. Not one of Douglas' most prolific compositions but a 'feel good' romp which segues into the introspective title cut. The rhythm section operates in peaks and valleys. Perowsky and Genus are on target throughout and seem overtly considerate comping behind Douglas and Potter. They never steal the show but turn up the heat when called upon. "Padded Cell" conveys the unnerving idea of such an instance. Emotions flare up, calm down, the tempo changes, an understated bass solo by Genus and mayhem wins over. Chris Potter is a perfect musical foil for Douglas. This reviewer has yet to warm up to Potter's somewhat gruff tone; however, his phrasing is intelligent and his dialogues with Douglas are generally captivating. All the compositions were penned by Douglas. Intriguing themes, melodic interludes, unorthodox tempos, a good dose of reckless abandon and skilled arrangements make Magic Triangle a delightful listen.

Magic Triangle may serve as a good introduction to the music of Dave Douglas. Most importantly, the jazz world should be thankful that Mr. Douglas is pursuing a vision that transforms most of the post-bop kiddie jazz that encompasses the jazz market. This is new jazz! Intriguing stuff.