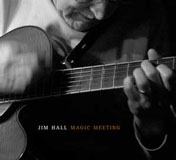 Jim Hall has long been an island of calm in a sea of overheated jazz guitarists. On countless solo efforts and memorable collaborations with Bill Evans, Paul Desmond, Sonny Rollins, and many others, Hall's subtlety and intelligence have elevated him above the crowd on an instrument where speed and pointless virtuosity unfortunately rule.

On his latest, Magic Meeting, recorded before a hushed Village Vanguard crowd last spring, Hall shows no signs whatsoever that his 74 years have slowed his nimble fingers or his fertile imagination. With empathetic backing from bassist Scott Colley and drummer Lewis Nash, Hall turns in a performance that's effortlessly cool without being cold. He covers daring post bop, Latin themes, muted ballads, and even a blues that proves that, despite his reserve, he can get down and at least relatively dirty. His reworkings of familiar fare like "Body and Soul and "Skylark never sound dated, while his romp through "St. Thomas ranges far enough from the calypso tune made famous by Rollins to sound almost entirely original.

Released in a limited edition by the web-based ArtistShare label, Jim Hall's Magic Meeting could serve as a master class for young guitar pretenders.