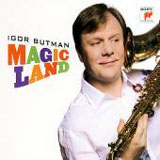 Russian sax man Igor Butman uses music from Russian cartoons and movies as the inspiration for Magic Land, where he has the support of a Hall of Fame band—Randy Brecker (trumpet), Stefon Harris (vibes), Chick Corea (piano), John Patitucci (bass) and drummer Jack DeJohnette, who doubles as producer.

"Bu-ra-ti-no embodies the music's spirit. Butman's soprano is joyful and the band takes fine advantage of the song's open spaces. He places the ballad "Amazing Far initially in the capable hands of Brecker, then joins him for a fine tenor/trumpet tandem. "Friends Song has a nicely funky underbelly and Butman shines here, too, taking interesting melodic paths along the way during his solos. The band has fun with the frenetic "Water Skis," especially Corea, DeJohnette and Patitucci, who exploit the tune's inherent mischief splendidly.

The tender ballad "Lullaby of Mommy Bear shows that Butman can sing a song, not just play it. The infectious "Summer Song shifts effectively between bebop and bossa nova, with Butman going back to soprano. "Golden Sun Ray sounds like a Coltrane foray at the outset, but morphs into a laid-back hybrid of funk and bop with Butman's tenor and outstanding work by the rhythm section. Butman plays with dexterity and fire on the Latin-flavored "Chunga-Changa," where Patitucci takes an exciting pizzicato turn.

Butman showcased a few of these tunes during a gig at New York's Dizzy's Club in late November, 2007. The rhythm section of bassist George Mraz, drummer Lewis Nash and pianist Cyrus Chestnut would have been worth the cover charge alone. As on the CD, Butman's tone was strong, compelling and bluesy and he played passionately without over-emoting. Their version of "Summer Song was reminiscent of Sonny Rollins' "St. Thomas." "Water Skis sounded more like a Raymond Scott Warner Brothers classic; the band ran with it, especially Chestnut, who quoted The Flintstones theme while soloing. In the right hands, even cartoon music can be technically challenging—and fun.