By CHRIS MOSEY
June 10, 2010
Sign in to view read count
With the death of Niels-Henning Orsted Pedersen in 2005, the keys to the kingdom of double bass playing in Denmark passed at long last to Mads Vinding. Only two years separated the two men—Pedersen was born in 1946, Vinding in 1948—but "young" Vinding always found himself in the giant shadow cast by Pedersen.

Both men were at different times house bassist at Copenhagen's renowned Montmartre jazz club, accompanying some of the best instrumentalists in the world. Both started early. Pedersen played with pianist Bud Powell at the tender age of 15. Vinding turned professional at 16. Pedersen went on to play most famously with pianist Oscar Peterson, Vinding with pianist Hank Jones.

Pedersen was the bassist of choice for visiting American jazzmen, largely because they knew his name (even if most of them were unable to pronounce it). But if they couldn't get him, they sent for Vinding and were often pleasantly surprised. This was because Vinding saw no reason for virtuoso displays. The feel of the song always came first as far as he was concerned, and he was rock solid when it came to rhythm. 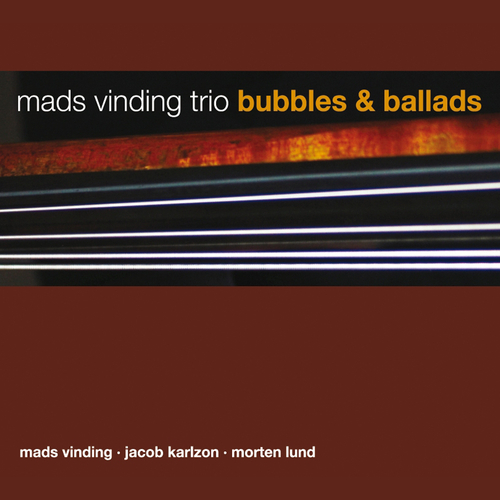 Here Vinding gets together with Swedish pianist Jacob Karlzon, who plays with the Peter Asplund Quartet and the Malmö-based Tolvan Big Band in his homeland, and Danish drummer Morten Lund, who is from a musical family in the town of Viborg (father is a multi-instrumentalist jazzer, mother plays flute).

Karlzon being a very dominant pianist, there is an ever-present fear that his dense playing—often but not always full of dark, rolling, melancholic chords—will overpower the leader's delicate work. However, a balance is usually struck, and is done so particularly well on Jerome Kern's "Yesterdays," where Vinding can be heard at his best, stating the theme.

This is not to denigrate Karlzon. The trio's version of Michel Legrand's lovely ballad "The Summer Knows" is a little gem, largely due to his subtle but muscular note placement, with Vinding again stating the theme and Lund providing clean and accurate brushwork.

There are two Wayne Shorter numbers, "Nefertiti" and "Footprints," and two Karlzon originals, "Cesterball" and the title track, which contains echoes of pianist Jan Johansson's jazz interpretations of Swedish folk music. The only Vinding original is "Flat Blues," which isn't really a blues at all, but one of the more experimental tracks, with a great many long, probing melodic lines from Karlzon and some fine drumming by Lund. 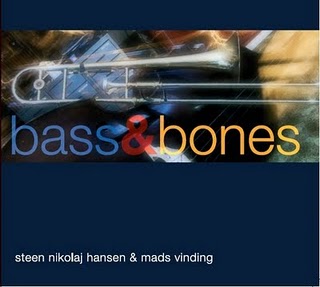 When it comes to duos, the mating of bass and trombone is rare. This disk demonstrates why. Trombonist Steen Nicolaj Hansen explains on the sleeve that the session grew out of his impromptu get-togethers with Vinding following their gigs with the Danish Radio Big Band. "It's always a great experience and fun both personally and musically," he says. There's a temptation to add the caveat: "though not necessarily for the listener."

The album actually gets underway quite promisingly with "Spartacus" and "It Might As Well Be Spring," but after that the novelty rapidly wears off. Despite the best efforts of J.J. Johnson and Kai Winding, in lesser hands the slide trombone rarely manages to liberate itself from the tailgate confines of traditional jazz. And when the only ensemble contrast is bass, the instrument falls—literally—flat.

"No humour, no jazz!" Hansen proclaims defiantly and there are times, it's true, when he does raise a smile, notably towards the end of "Sail Away" and that old Irish knockabout, "How Are Things In Glocca Morra?." But the treatment he gives standards such as "You Don't Know What Love Is," "All The Things You Are" and—worst of all—"When I Fall In Love" is at best weirdly lugubrious.

Good things come from experimentation such as this. It should be encouraged. So it is to be hoped that Messrs Vinding and Hansen will continue their impromptu sessions after Danish Radio Big Band dates. But that they won't in future inflict them on others.

Tracks: Nefertiti; You Don't Know What Love Is; All The Things You Are; The Summer Knows; Bubbles; Footprints; Misty; Flat Blues; Cesterbal; Yesterdays; On Green Dolphin Street.

Tracks: Spartacus; It Might As Well Be Spring; Sail Away; You Don't Know What Love Is; Three Flowers; All The Things You Are; How Are Things In Glocca Morra?; Polka Dots And Moonbeams; The Old Black Magic; Bass And Bones; When I Fall In Love; But Not For Me.