By ROBERT SPENCER
August 1, 1998
Sign in to view read count 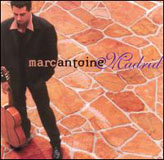 Marc Antoine is a gypsy guitarist, and this disc is evidence of his travels. "Sunland" sounds like a funky instrumental version of that old song, "If I Were a Carpenter, and You Were a Lady." Much more funk-based is the title track, "Madrid." "Dreamsicle" builds on a dreamy shimmer of synthesizer and Harmon-muted trumpet (courtesy of Rick Braun), while Delphine adds vocals just as dreamy. "Sarava" is playful and upbeat, and "Plaza Mayor" overlays Spanish licks on a cool funk base.

"Jazzenco" lives up to its title in being one of the more intriguing hybrids on the disc. Antoine splits his time between Los Angeles and Spain, and here they both are in strong relief. "Concache" is a brooding number that Antoine navigates with some especially reflective playing. "Amour Hispanic" builds on another deep funk groove (with eerie, whispery vocals); "Cabrillo" is an even deeper groove in which Antoine builds tension and interest by playing with special tenderness; "Rebecca's Waltz" is tender all the way through, and is an all-too-brief example of what Antoine can do when the rhythm and other machines are turned off.

Madrid is ample evidence of Antoine's talent and versatility. His mix of styles is intriguing, although the intrigue is muted by the rhythmic sameness of many of the tracks. Perhaps without such a smooth gloss this recording would have been lastingly valuable; as it is, it is both pleasant and promising.