By JOHN SHARPE
September 21, 2009
Sign in to view read count 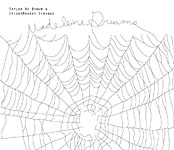 That this is cornetist Taylor Ho Bynum's fourth leadership date so far this year speaks volumes about his growing stature as a bandleader, writer and virtuoso instrumentalist. Justly known as one of celebrated composer/saxophonist Anthony Braxton's foremost interpreters over the last decade, Bynum's star now shines even more brightly in the creative music firmament, thanks to these multiple projects, and parts in Jason Kao Hwang's Edge, the Convergence Quartet and the orchestras of Bill Dixon and Cecil Taylor.

For the second outing of his improvising chamber ensemble Spider Monkey Strings, Bynum further tweaks the already oddball line-up by adding Kyoko Kitamura's voice to the group's four strings, tuba and drums. It's a significant change and a necessary one, given that the centerpiece of the disc is the 27-minute suite "Madeleine Dreams," based on extracts from the 2004 National Book Award finalist novel Madeleine is Sleeping (Harcourt, 2004), by his sister, Sarah Shun-lien Bynum.

Bynum's richly detailed settings for his sister's words take on some of the dreamlike aspects of the source material, with his winningly oblique arrangements mirroring the opacity of the text. Even at their most formal, in counterpoint to the opening and closing recitations of "hush," the chamber correctness is subverted by Pete Fitzpatrick's subtle guitar electronics. Elsewhere, as in "objects lost on journeys"—the longest section of the suite—the impressionistic ensemble envelopes Kitamura's slinky vocal in a swirling mass of intertwining lines, parting briefly for Bynum's cornet to cavort over skittering guitar, then later a muted dialogue for pizzicato strings and tuba. Each repeated listen uncovers correspondingly more depth to the artistry of this heartfelt and challenging project.

Rounding out the final 18 minutes of the program, by way of contrast, are more direct renditions of pieces by three of Bynum's musical heroes. Ornette Coleman's "What Reason Could I Give," from his under-rated Science Fiction (Columbia, 1972), hews close to the original, with Kitamura following the template set by Indian vocalist Asha Puthli's delivery of Coleman's lyrics. But it is given a twist with a martial drum opening in which Luther Gray channels the great Ed Blackwell, and the ensuing duet for Bynum's puckish cornet and Joseph Daley's harrumphing tuba, which survives the introduction of Coleman's theme and thrives throughout.

Duke Ellington's "The Mooche" and Sun Ra's "Angels and Demons At Play" are given looser treatments, with tuba and vocal exhalations giving way to a joyous bounce and rounds of playful soloing in the former, while the latter moves from cinematic guitar effects to a barreling blown bass vamp, wordless scatting and percolating string lines, for an upbeat ending to an exuberant yet weighty release.

Track Listing: hush; le petomane; lesson; metamorphosis; objects lost on journeys; hush (reprise); What Reason Could I Give; The Mooche; Angels and Demons at Play.