Kate Williams Septet: Made Up 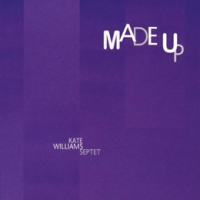 Made Up is the fourth album from British composer/pianist Kate Williams. Her previous albums have featured trio, quartet and quintet lineups; Made Up leapfrogs the sextet setup to feature a seven-piece group of top flight UK musicians who prove to be superb interpreters of Williams' brightly original compositions.

Made Up was released in the UK at the end of 2011: a few months later the group was nominated for a 2012 Parliamentary Jazz Award for Ensemble Of The Year, a well-deserved accolade that recognizes its style and ability. As the group's name makes clear, this is a septet recording: but there are plenty of times—notably on the rollicking "Climbing Up Falling Down" or the reflective, Charles Mingus-like, "Untitled Peace Piece," where Williams' arrangements make it sound like a much bigger band, with the harmonic interplay between flautist Gareth Lockrane, trumpeter The Osian Roberts/Steve Fishwick Quintet and saxophonists Ben Somers and Julian Siegel delivering a strong, full sound.

One welcome characteristic of Made Up is its occasional quirkiness. Williams has a pleasing ability to write tunes that have slight but effective twists—rhythmic shifts, melodic changes and harmonic variations—which add color to the underlying themes. "Stop And Chat" has just the right level of angularity and accentuation—a set of musical conversations between Siegel, Williams, Fishwick and drummer Tristan Mailliot—while the swinging, straight-ahead "Made Up" is distinguished by Siegel's distinctive bass clarinet solo.

It's not all oddball eccentricity: Williams also writes gentle, more lyrical, tunes. "Pelagic," a trio piece, exudes a calm beauty courtesy of some relaxed playing from Williams, Mailliot and bassist Oli Hayhurst. "Depiction" shares that calmness, even with the addition of saxophones, trumpet and flute, with Fishwick and Jeremy Brown's solos a perfect match for the tune's mood.

Although it's not an overt aspect of her compositions or her playing, Williams seems to be an Eliane Elias fan. The group's gently flowing interpretation of the Brazilian pianist's "One Side Of You;" the only tune on the album that isn't a Williams composition; is followed by "For Eliane," a swinger that mixes the Latin dash of Mailliot's drumming and Williams' stabbing electric piano with some tight ensemble playing from the frontline musicians.

There's an interesting ambiguity to the title. Music is always "made up," even if terms such as "composed" or "improvised" are preferable. In parts of the UK someone who is especially proud of themselves and their achievements will also be "made up." Whether or not such ambiguity is deliberate, Williams can rightly be made up about Made Up, a refreshing album that will hopefully be the first, rather than the only album by the Kate Williams Septet.

Climbing Up Falling Down; Untitled Peace Piece; Stop And Chat; One Side Of You; For Eliane; Pelagic; Depiction; Made Up.