By HRAYR ATTARIAN
December 30, 2015
Sign in to view read count 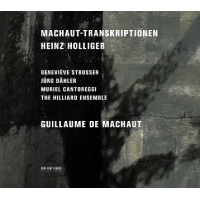 Over a period spanning eight years (2001-2009) Swiss oboist and composer Heinz Holliger has radically reinterpreted the works of medieval composer and poet Guillaume de Machaut. Holliger calls the resulting disc, Machaut-Transkriptionen "transcriptions" but in fact it is much more than that. By changing rhythmic structures here, time signatures there, even improvising on de Machaut's themes Holliger has created new, modern and even Avant-Garde pieces rooted in 14th century motifs.

Holliger pairs his progressive adaptation of three of de Machaut's secular songs with Hillard Ensemble's exquisite renditions of the originals. For instance the vocal take of "Ballade IV Biaute Qui Toutes Autre Pere" has an exalted almost sacred feel laced with melancholy. Meanwhile in Holliger's variation the unaccompanied trio of violists, Muriel Cantoreggi, Geneviève Strosser and Jürg Dähler, bring out the intriguing inner dissonance of de Machaut's tunes. Their intertwined and resonant soliloquys result in an ethereal and otherworldly ambience.

On the remainder of the album Holliger reimagines de Machaut's compositions in an entirely new context, without sacrificing their thematic core. De Machaut conceived "Lay VII" (Le Lay des Dames) as a monophonic lyrical narrative. Heinz, working only with the Hillard Ensemble, deconstructs it into small melodic fragments and rebuilds it into a luminous mosaic of mellifluous harmonies.

The free flowing, near extemporized "In(ter)ventio a 3" is a stream of consciousness meditation on de Machaut's "Complainte." The violas meander in individual contemplative lines around each other weaving an angular and haunting fantasy. Its somber mood goes from fiery to reserved and melancholic.

Holliger follows this de Machaut's actual pensive poem "Complainte." He brings together all four voices and the three violas and creates a superbly expressive and sublimely emotive polyphony. The atmosphere transforms from edgy angst ridden to darker and more wistful. An almost liturgical solemnity envelops this haunting finale.

Holliger's reassessment of a long forgotten genius' oeuvre certainly makes for a demanding listening experience. Nevertheless it is a captivating record that is immensely rewarding both intellectually as well as aurally. This splendid release is a testament of the timelessness of music.