By DAN BILAWSKY
November 30, 2010
Sign in to view read count 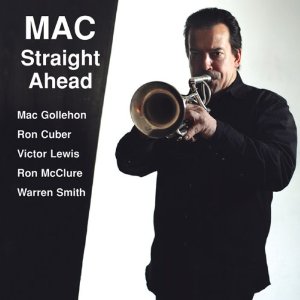 Brass man Mac Gollehon means business on Mac Straight Ahead. The ten tracks on this album present Gollehon in a variety of settings and on a variety of instruments...at the same time. While the idea of overdubbing oneself on record is fraught with peril, Gollehon beats the odds. Sometimes he conjures sounds of a full, brassy big band, while other settings pare things down to a few instrumental voices. Though trumpet might be his main axe, Gollehon plays better trombone (and French horn) than most players on the scene today, and his diverse experiences—having played in the Buddy Rich and Stan Kenton bands, and worked with the likes of Lester Bowie, Ray Barretto, Madonna and Chaka Khan—have certainly helped to expand his outlook on music. Most importantly, the overdubs aren't done as a gimmick, but in service of some fantastic arrangements.

The album starts with Roy Eldridge's "Fish Market," and Gollehon's arrangement of the piece has a slightly raunchy air to it. The Texas tenor attitude is transplanted to baritone saxophone, as Ronnie Cuber delivers a strong performance. The soloists on this one could easily be walking the bar as they deliver their spirited lines. It's hard to imagine anybody doing anything too new with Thelonious Monk's "Round Midnight" at this point, but Jack Jeffers' arrangement—with the bass handling some melodic moments and Gollehon's trumpet working over some unique brass backgrounds—takes this well-worn tune to a new place. Gollehon is more Maynard Ferguson than Miles Davis, and his stratospheric flights find a place on the large majority of these songs.

This "Lush Life" has a bit more forward momentum than some renditions, and Gollehon's trumpet work, along with some stellar soli runs, make for an intriguing listen. The title track is Gollehon's first original on the album and organist Greg Kogan makes things simmer right from the start. Bassist Ron McClure underscores the opening of "Carol's Song" with some fat half notes that are simple, yet well-suited to this piece and some swanky, rich brass voicings give way to a slightly noir-ish sensibility on this burnished ballad. Gollehon and company turn up the heat on "Strange Behavior," which begins with the leader's bone work dancing atop Victor Lewis' intense drumming, and an explosive version of "After You've Gone." The final track on the album is a soulful take on Charles Mingus' "Goodbye Pork Pie Hat." Gollehon's trombone and Cuber's baritone saxophone sizzle here and this dirge-like composition is transformed into a dirty, blues-drenched beauty. While Mac Straight Ahead is far from a one-man show, Gollehon proves to be a jack of all trades and a master of everything.