By JEFF DAYTON-JOHNSON
January 26, 2012
Sign in to view read count 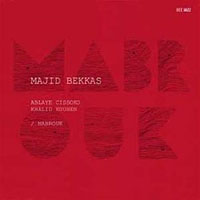 Bekkas is a leading Gnawa musician who sings and plays the oud, as well as acoustic guitar and guembri, the three-stringed bass-like instrument that provides the trance-inducing pulse of Gnawa music. The Gnawa, in turn, are spiritual brotherhoods formed in Morocco among slaves brought there from sub-Saharan Africa over the centuries. Bekkas has collaborated with a number of jazz players, including saxophonist Archie Shepp, pianist Joachim Kuhn and drummer Hamid Drake, concentrating on the more adventurous end of the jazz continuum.

On Mabrouk, Bekkas is joined by Ablaye Cissoko, who plays the kora, the beautiful West African stringed instrument with a crystalline sound, here tuned specially to play along in Moroccan musical settings. Percussionist Khalid Kouhen plays plenty of Moroccan drums, but also Indian tabla. In short, it's a passionate and smart mélange of elements in which Bekkas draws upon a vast musical geography extending far beyond his Moroccan origins. There are healthy doses of the virile vocal style and bracing, driving beats familiar to devotées of Moroccan musical styles, but several quiet, reflective moments as well, like the opening moments of "Masmoudi." The mournful acoustic guitar on "Le Monde à l'envers" even sounds a little like The The Rolling Stones' "Lady Jane."

Despite the hefty jazz side of Bekkas' curriculum, and this record's appearance on the French Bee Jazz label, no one is going to mistake these performances for Stan Getz or Muggsy Spanier. And though it doesn't really matter whether the record is jazz or not, it's illuminating to consider the features Bekkas' trio share with jazz performers.

Like many a jazz date, the performances on Mabrouk are structured around the statement of a theme followed by improvisation over an insistent and ingratiating beat; Bekkas' guembri plays the role of the bass. As often as not, it's Cissoko's florid kora that takes the most striking solos (as on "Bala Moussa"). Within this structure, the players express an easy empathy and interaction—like many a great small jazz group.

Moreover, Bekkas' open-minded and open-hearted melding of Moroccan, West African, Indian and other musical elements highlights the degree to which Moroccan music itself is already a syncretism of various distinct strands: the give-and-take among indigenous Berber song, courtly Arabian music, and the Gnawa music, sub-Saharan in origin, mastered by Bekkas. Jazz, too, arose from musical cohabitation—of European and African practices in New Orleans' Storyville district in the nineteenth century.