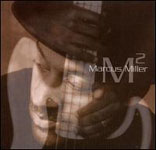 Marcus Miller is one of those crossover artists whose influence is felt in numerous media, including movie sound tracks like Boomerang and Rush Hour. Lest we forget all of the innovations that Miller has created, his new M-Squared album enumerates in a soulful and electronically enhanced style the multitudinous elements that comprise his immediately identifiable sound.

First and foremost is Miller's electric bass work, which obviously consists of more than time-keeping. As one of the most important contemporary bass leaders, not only is Miller building his own discography and production credits, but also he is growing his means of expression.

Those means may be controversial to some of the jazz purists because of his extensive use of programming. Such programming does raise the question of the importance of natural instrumental sounds in jazz—a question with no clearly defined answer. One thing is clear. Marcus Miller absorbed the fundamentals of jazz first and expanded its horizons later, as did his mentor Miles Davis. As did Herbie Hancock and Wayne Shorter, who appear on M2.

One can hear the gospel-tinged background vocals on "Your Amazing Grace," even as the lyrics are altered for repetitive effect in an R&B fashion. James Carter's work on "3 Deuces" merges the funk of Miller's bass line, which becomes the melody itself, with a wail and groove reminiscent of the first generation of tenor saxophone masters. Carter doesn't disappoint with his altissimo ventures and slap-tonguing to end the tune with exclamation points.

Coltrane worshippers may be aghast at what Miller does with "Lonnie's Lament." What he does is apply funk bass lines with a heavily programmed back beat in a synthesized mesh on which Miller himself becomes the virtual orchestra. Branford Marsalis, Kenny Garrett and Hubert Laws hitch a ride on the music machine and float in their own solos.

A match-up of the two fusion adherents, Miller and Hancock, promises interesting results. But on "Goodbye Pork Pie Hat," Hancock pretty much recedes into the background, offering a restrained solo but being overwhelmed by Miller's electronic juggernaut of microprocessed instruments.

Miller has fun with the album, working in his eight-year-old daughter's voice on a song tribute to her, "Nikki's Groove." With his pause-and-fill interludes, Miller conveys a sense of play, and one is reminded of Stevie Wonder's "Isn't She Lovely?"

Part of the reason that Miller's music sounds familiar is the frequent use of his techniques in movie sound tracks, such as "Boomerang," which he wrote. Miller's "Cousin John," involving Shorter and Laws, sounds for all the world like bits and pieces of "Ferris Buehler's Day Off's" theme, but with the insertion of a melody. Not Shorter nor Laws, but Miller's bass synth, is the memorable element of this tune.

With full production control of his new recording, Marcus Miller has accessed a head-swimming array of effects and combined them into a repertoire of 15 tracks, dissimilar in melody but similar in the uniqueness of the sound. Now that music has gone beyond the electronic frontier for well nigh 30 years, Miller continues to stress that the infectious spirit of the music should remain its primary source and its most important result.