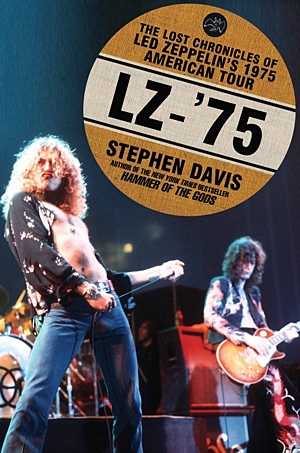 It's been a long time since they rocked and rolled, but even more than 30 years after calling it quits, Led Zeppelin remains one of the music business' top selling acts, be it measured through recordings or related memorabilia.

After decades of deciphered decibels and scrutinized scandal, there really aren't many zapping Zepp revelations, or even reverberating rumors, left in circulation. What LZ-'75 offers is a rare, behind the scenes perspective, still a strong selling point since most information on the band is either well known or well guarded.

Subtitled The Lost Chronicles of Led Zeppelin's 1975 American Tour, the book was compiled on recently found notes from the post-touring period when author Stephen Davis composed his bestselling Hammer of the Gods. That 1985 bombshell—with its tales of bestial groupie games, dark magic and multiple other excesses, though subsequently contradicted with venom by the principals—helped fuel the ongoing Zeppelin mythology.

Some of this memoir reads like an early term college paper about how to spend vacation time covering a rock band, but there are enough engaging sidebars to establish Davis' readable authority. The writer's enviable access helps illuminate everyday anecdotes that flow well through this type journalistic jaunt.

"I saw that the current gods of rock were mere mortals after all," observes Davis from the book's evenly grounded viewpoint. Still, as a rule, rock gods are usually a better read than mere mortals and readers seeking in-depth documentation of debauchery may be disappointed.

"Robert shopped at record stores in Greenwich Village. Jimmy Page hung out with guitarist Joe Walsh [who presented Page with a very rare Les Paul model guitar]. Together they attended a Linda Ronstadt concert at the Capitol Theatre in Passaic, New Jersey. John Bonham drank like a fish and had a stomach ache. The tour doc suggested to John that he modify his alcohol intake and just got laughed at. No one ever knew where John Paul Jones was."

Further personal reflections and documentation from throughout the postscript public domain would have been better suited for a more comprehensive epilogue, and probably reinforced the group's enduring entertainment world stature, which seems like the volume's chief calling card.

Drummer John Bonham's seemingly inevitable demise has remained a rock and roll milestone and deserves much more play than either author or editor have given, especially since it led to the superstar band's conclusion, poignantly dealt with by the remaining members. Bonham gets some due, but as a symbol of the band he loomed so large, as a potentially violent volcano or pitifully soused wretch, the subject begs more attention. Davis' admitted fear of Bonham may explain omissions but doesn't justify them, unless the writer felt he had said enough in Hammer and decided to let further legacy rest in peace.

Bullish manager Peter Grant, often alluded to, was also an apparently larger than life character with momentous achievements. His relatively youthful passing also seems worthy of more mention. More depth of both the core subjects' and writer's sentiments would be an improvement.

There are some fascinating, brief episodes like singer Robert Plant reportedly having a top-secret operation on his vocal chords, and lesser moments like a reportedly spooky visit from Charles Manson's demented disciple Lynette "Squeaky" Fromme, or backstage comedy concerning Bonham's monumental diarrhea and diaper supply.

There are other minor treasures found in very interesting footnotes like the episode where guitarist Jimmy Page hangs out with William Burroughs or trivial, insert your own punch line type tidbits like Linda Lovelace introducing the band in LA.

While there was no way to predict the lasting impact of Led Zeppelin back in 1975, a statistical breakdown of the band's enduring image and marketing status might have put the scene into greater historical perspective with added future ironies. Epochal or not, 1975 was nowhere near a complete image of the band, let alone a thorough story. Even granting the snapshot premise and probable reader's general awareness, if you're going to release something with this much history involved, there's a demand to illuminate present day context.

How, eventually, the relatively reclusive Page got his senior statesman due in the film It Might Get Loud; Jones' 2009 resurgence alongside younger guns Dave Grohl and Josh Homme in Them Crooked Vultures; or Plant's unlikely acoustic, roots based journey back to the top of the charts, including his refusal to participate in proposed reunions; all would have all provided valuable hindsight and the built-in irony that distinguishes the best of biographical projects. 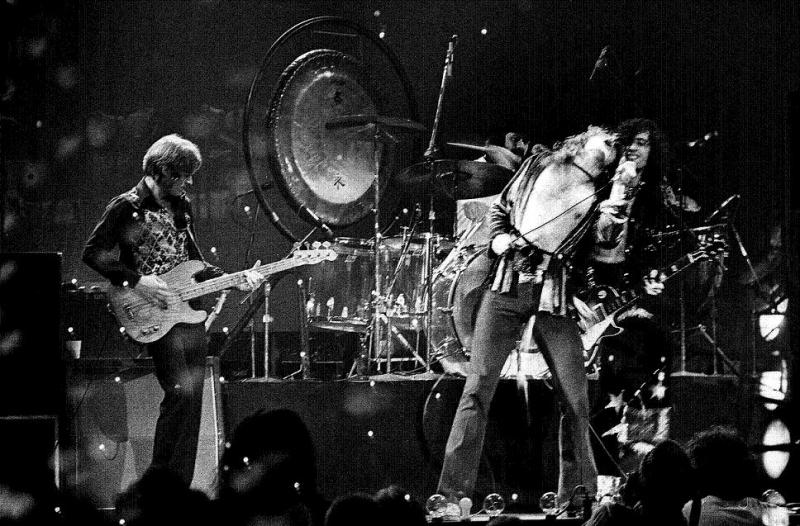 Page, Plant, Jones and countless heavy metal nuts and bolts will always be judged in comparison to the dancing days of the late Bonzo Bonham and the immortal LZ balloon. Thus, to a lesser extent, Davis faces constant comparison to Hammer.

This volume is a must for Zeppelin devotees and a maybe for students of classic rock. Davis concludes with the observation that to really appreciate the scenes he describes, you'd need first hand observation. True enough, but the point of such memoirs is to enhance such sightings, and LZ-'75 doesn't always offer a feeling of being there. Overall, it's an interesting footprint along a rare journey where giants once trod.

You won't find yourself stopping to re-read many passages of LZ-'75 for their poetic flow or sensational situations. You will find yourself turning page after Jimmy Page for a solid reflection of life on the stairway to heaven, during good times, bad times; ten years gone. Perhaps hard rock history is best as light reading subject matter, anyway.

Light as a Led Zeppelin maybe.