By HRAYR ATTARIAN
October 15, 2012
Sign in to view read count 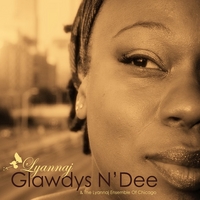 The term "world music" takes a new meaning with singer Glawdys N'Dee's debut, Lyannaj, which means to connect or unite in solidarity—and unite, she does. The Guadeloupean-born, Parisian-educated and Chicago-based N'Dee brings together, in three languages—Creole, French and English—various musical styles of the African Diaspora, from Caribbean rhythms to jazz, and from gospel to the blues.

From the opening title track, with N'Dee's bass and percussion-backed recitation reminiscent of Jayne Cortez, to the closer "Hommage Ala Femme Noire," where her voice, stripped of any instrumentation, rises like a prayer, Lyannaj is imbued by a raw spirituality.

N'Dee's rich and haunting alto carries an emotional force comparable to the inimitable Nina Simone. Her vocalese on "Kreyol Blues," trading lines with rough-hewn trombonist Bill McFarland, has all the passion of early blues, especially when enhanced by percussion and Herb Walker's Delta-influenced guitar. While she brings an equal poignancy to the chilling lyrics about the horrors of slavery on "Goree," Fred Jackson's soprano sax blows like a breeze over the solemnity of those words and the sound of the congas.

This is not to suggest that the record is serious and melancholic; on the contrary, there is a certain joie de vivre on such songs as "Veye," with its upbeat island tempo driven by brass and drums, and the jazzy, urbane "Manman Africa," which is not unlike Fela Kuti's genre-bending work. There is also a healthy dose of sensuality in N'Dee's undulating vocals on the mystery-shrouded, Middle Eastern-sounding "Free Your Mind," with Larry Gray's oud-like cello. Only her few attempts at R&B, including "Time Has Come" and "All Over Again," sound a tad lightweight, perhaps because of an overreliance on electronics. Still, even here her unique musical vision makes the tunes quite enjoyable.

Glawdys N'Dee, supported by a fine selection of Chicago musicians on her first outing, has created a gem of a record that will surely stand the test of time.