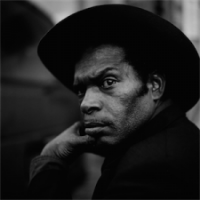 Denmark has a long tradition of jazz immigration and in the land where the Danish author Hans Christian Andersen was born, it is truly a musical fairy tale that such great artists as saxophonists Ben Webster, Dexter Gordon and Stan Getz have lived and worked in the country, along with pianists like Kenny Drew and Horace Parlan, trumpeter and arranger Thad Jones, and drummer Ed Thigpen. It is a musical legacy to be immensely proud of, and its story has been told many times, but in the narrative of American jazz musicians who have lived and played in Denmark, the name of alto saxophonist Luther Thomas is often forgotten.

However, this is about to change with the ambitious double-album In Denmark, released by the Danish label ILK. ILK normally does not concern itself with historical releases, but this is a noteworthy exception and it speaks volumes about the respect that surrounds Thomas. Above all, he was a musician's musician and even though he is connected with the avant-garde movement in jazz, he could play with anybody and was first of all interested in music as a pure form of communication. He reveals this in a funny way on a joyous duet with the old time Danish jazz trombonist Ole "Fessor" Lindgren where he says: "It's not a saxophone, it's a telephone. Talk to me baby!"

There are many different musical conservations on the album. Wonderful duets with drummer Kresten Osgood and Lindgren, trios and quartets where Osgood and Thomas are joined by bassist Nils Davidsen and trombonist Erling Kroner, and Thomas sitting in with pianist Mikkel Mark's trio. The repertoire on these sessions is just as diverse as the man himself: standards ("Body and Soul"), advanced bop ("Round Midnight," "Groovin High," Crazeology), an avant-garde anthem ("Lonely Woman") and original compositions ("Selim Funk," "Dotty"), all done the characteristic Luther Thomas way. For instance, his interpretation of Thelonious Monk's "Round Midnight" brings all the strangeness back in this often covered tune in a reading that sounds like a drunk man walking around the labyrinthine streets of the big city with his roaring voice echoing in the night.

There is joy, pain and humor in Thomas' music and it is most purely distilled on the second disc where he is all alone. Here, he plays saxophone, flutes, percussion and sings, announcing a tribute to trumpeter Lester Bowie and chanting deep blues music. He can be gentle, almost whispering, and can cry like saxophonist Albert Ayler, wailing with despair, but the fire is burning with confirmation. This is not the sound of a man giving up, but rather the sound of a man giving it all he can. As he says: "I got to do it like it is the last day."

At one point, Thomas says: "can you remember?" and translates it into Danish: "kan du huske?" This album is a worthy musical testament and should hopefully secure that Thomas is not forgotten. His music transcends all language barriers and it is a keen reminder that jazz is the language of the human heart in all its beauty and complexity.

Note: The album includes excellent liner notes by the late, esteemed jazz writer, Ib Skovgaard, who also produced the album with Kresten Osgood. There is also a hidden track at the end of CD2 where Luther Thomas plays piano.