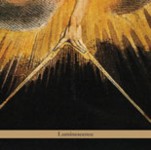 The piano-bass-drums trio has become such a staple of jazz recording that it must be difficult for any trio to come up with something fresh. Borah Bergman and his crew accomplish this task, and whilst their work lacks the compositional integrity of the holy trinity of Thelonious Monk, Herbie Nichols, and Andrew Hill, there's enough substance here to allay fears of cocktail lounge anonymity.

Bergman has technique to spare but it's to his credit that he's not in the business of applying it to the maximum all the time. Truth is, one of the elements that contribute greatly to the individuality of the music is the fact that he uses it so sparingly. The opening "Quantum" is a case in point. Bergman invests his lines with a slightly faltering quality that's an antidote to surface finesse. The bass and drums of Greg Cohen and Kenny Wollesen dance around Bergman's lines, subverting the idea of the piano as leading even while their contributions make for a highly organic whole.

The similarly dark hues of the following "Candela" are leavened somewhat by Wollesen's cymbal washes, although he deploys them in such a way that they're more than the stuff of mere coloration. Instead they contribute to the music's momentum and at around the two and a half minute mark, the group coalesces in a manner that's a subtle joy to hear. Again Bergman uses veiled repetition as a means of expression and the effect of momentum beneath a surface of suspended time is achieved with aplomb.

Producer John Zorn guests on alto sax on the lengthy "Luma," and although his presence is not unwelcome, his work seems somehow surplus to requirements. The fact that it seems this way is a tribute to how well integrated the trio is. As an accompanist Bergman is indeed somehow akin to Hill, the semi-static nature of his work coming on like an alternative voice, even while Zorn makes full use of angular phrasing to make an impression.

The exquisite ennui of much of the program is replicated in the closing—and indeed tellingly titled—"Opacity" where the momentum generated by Wollesen is flagrantly subverted by his band mates. Cohen's bass comes as close as anything to something melodic, but again the underlying impression is of disparate shards of music, as encapsulated by each player in turn, coalescing in a manner that can only be described as greater than the sum of the parts, especially in view of the music's cumulative effect.