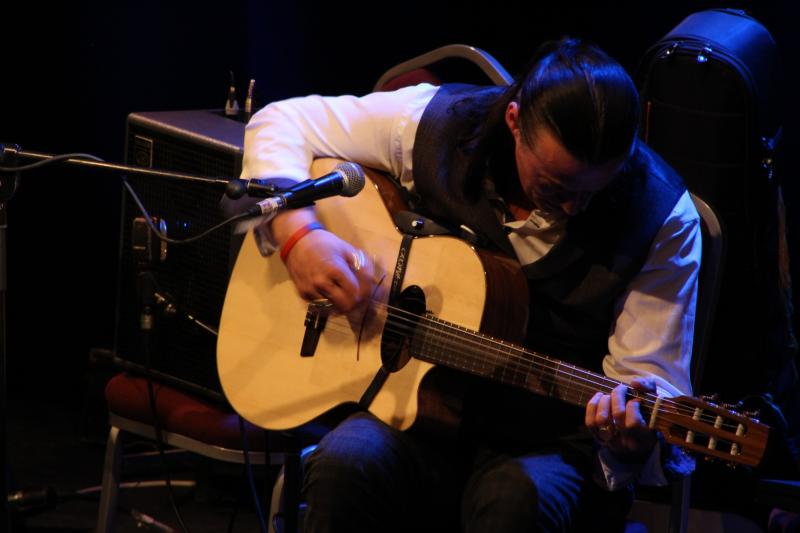 What's in a name? Quite a lot if it happens to be Reinhardt. That surname still excites press and public alike more than sixty years after the death of guitarist Django Reinhardt. It also generates a high degree of expectation. The Belfast audience was primed for a show of breathtaking gypsy-jazz virtuosity from guitarist Lulo Reinhardt, great-nephew of Django. Doubtless too, many were expecting some of Django's tunes, several of which have become part of the jazz standard repertoire.

Lulo Reinhardt, however, could never stand accused of trading on the illustrious family name, for he's pursued a very personal path. Unlike many gypsy-jazz guitarists who have plundered Django's songbook and imitated his style slavishly, Lulo Reinhardt not only writes all his own material but has developed an inclusive style that doesn't discriminate. Nor, despite possessing a formidable technique, is he an exhibitionist. There were certainly a few hair-raising solos from the guitarist to thrill the crowd in the Elmswood Hall but it was his exceptional musicality—and that of his excellent band—that triumphed.

The dashing tango "Damien" opened the set with Reinhardt and violinist Daniel Weltlinger trading breezily back and forth. 'For Django" paid lively tribute to the early Quintette du Hot Club de France, with a touch of samba in the mix. Throughout the evening Reinhardt's vocabulary reflected the migratory route of the gypsies from India a thousand years ago on to Egypt, Armenia, Persia and throughout Europe. Reinhardt's strings conjured the Arabic oud as much as flamenco on the passionately smoldering "Magdalena"; drummer Uli Krämer's cantering rhythm and bassist Harald Becher's two-note ostinato formed the backdrop for Arabian-flavored improvisations from Reinhardt, pianist Winfried Schuld and Weltlinger.

Whether exploring folkloric roots or more contemporary fare like the aptly titled—and vaguely Pat Metheny-esque "Funky Living Room" the quintet seduced with its flowing rhythms and melodic contours. Reinhardt slowed things down on the balladic "Hotel de Paris," a lyrical, gently singing number that, with a slight nod to "La Vie en Rose," captured the romance of French capital. A short, vivacious burst of manouche jazz closed the first set.

Reinhardt demonstrated throughout the show that there was much more to his palette than gypsy-jazz colors: the clave rhythm of Cuban son infused "Mar y Sol," with Weltlinger, Schuld and Reinhardt all in captivating form; African udu and konnakol fused colorfully on Adrian Legg's "Inspiration" -an epic marriage of soaring melodic lines—Celtic included—and driving rhythms. The blue-toned, slow-burning "Katoomba Birds" saw Krämer play cajón with brushes, as guitar, violin and piano in turn wove lyrical lines.

"Lulo's Tango" and the incendiary flamenco tune "Que Pasa?" once more raised the temperature, with the band displaying the sort of chops that were the result of thirty previous nights of fine-tuning on this extensive Uk and Irish tour. The lilting "Samba Para Leon" and the racing gypsy jazz of "Swing 2012" capped a stylistically varied and highly entertaining set in style, with Reinhardt displaying technique of great finesse and dazzling attack.

The instant standing ovation was rewarded with an encore of "Asia," a twenty-minute epic that began with Krämer's ethereal water percussion, bells, shimmering gongs and bird-song. It came as no surprise to learn that Krämer had studied with master percussionist Trilok Gurtu. Reinhardt entered with hypnotic Arabian textures before a flurry of rasgueos upped the tempo. With Reinhardt strumming furiously, Weltlinger and Schuld—on electric piano—took extended improvisations. Reinhardt's exhilarating, rhythmically dramatic response ushered forth spontaneous applause before a delicate, sung coda drew a line under a stunning finale.

Lulo Reinhardt doesn't attempt to imitate his more famous namesake, and just as well, for had he just churned out technically brilliant versions of Django's tunes then we'd have been robbed of his own wonderful musical mosaic.