By WARREN ALLEN
August 2, 2009
Sign in to view read count 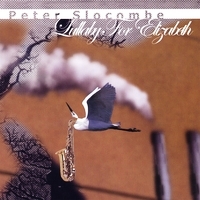 At age 24, Peter Slocombe sounds like a veteran. His debut, Lullaby For Elizabeth, shows a warm, lilting tenor sax sound, hinting at Joe Lovano and Michael Brecker, but mixed with a unique restraint rarely found in today's young jazz players. His music mixes folk and funk alike in the greater jazz tradition, keeping it all moving with an assortment of grooves.

Slocombe leads on saxophones, but recognizes the power of his sidemen and gives them plenty of room to dig in. This is his chance to shine as a composer too, and the ensemble helps him look good. Guitarist Larry Koonse, pianist Gary Fukushima, bassist Sam Minaie and drummer Matt Mayhall build hypnotic, meditative atmospheres on every track. The tunes themselves sound fresh and original, with melodies that grow and expand among these good players.

Space is critical here, as almost every track opens with a solo statement of some kind. "2 O'clock Express" features a lone sax that swells into an intricate but beautiful ballad, never giving way to a traditional solo section; a lovely ensemble piece, buoyed by Fukushima's flourishes. "The Keys for Keenan," which may be the highlight of the album, draws a humid landscape from the timbres of piano and sax. The interplay between them is picture perfect, Slocombe filling the air with a light vibrato, and Fukushima sending patters of notes rolling like soft stones.

"Twilight Beast" is the most up-tempo tune here, cooking along at a tasty pace, with great solos from sax, guitar and piano. But as a whole, the tunes seldom fly into frenzy. The importance of note choice wins out over technical fireworks. There are some cries and sighs from the sax, but even this adds to the feeling of introspection that seems to dominate the album.

The whole thing moves with the easy, romanticized flow of memory. The songs themselves suggest a certain sense of nostalgia, both in their names and minimalist sounds. The soft treble piano and tinkling cymbals of the title track, the "Lullaby," lays an emotional bedrock upon which the soloists build. That Slocombe taps so strongly and easily into this kind of soulful foundation should be a sign of good things to come.