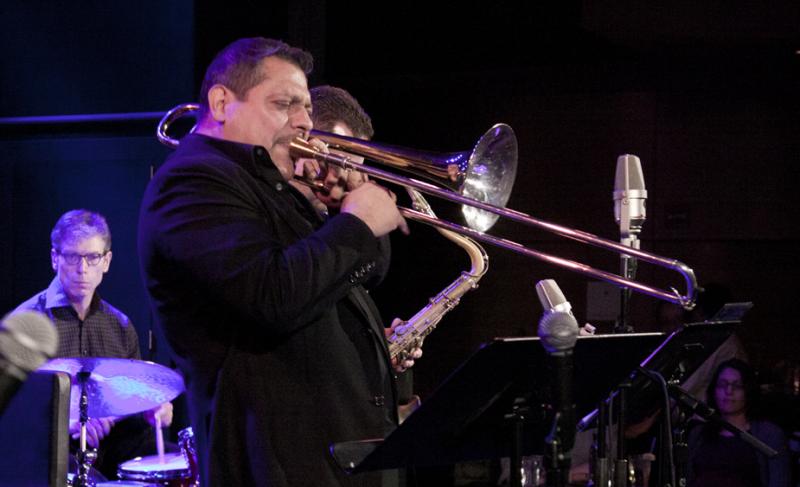 For two nights only, trombonist Luis Bonilla brought his quintet to Dizzy's Club. The first set on the first evening launched off into an assured blast of convoluted style amalgamation. Many might view Bonilla as a Latin jazz specialist because of his Costa Rican background, but the Californian 'bone man bandleader's version of jazz skirts many different zones, usually within each individual composition. Opening with some sleazily slurred blues, the combo switched to ballad mood, transforming into a funk feel, with pianist Bruce Barth taking a spiky, fragmented solo. By the fourth tune in, the aura had shimmered again, transforming into an Indian mystic haze, this composition created especially for the band's appearance at The Rubin Museum Of Art in 2010. Ivan Renta switched from tenor saxophone to soprano.

Most of the set's works were lifted from Bonilla's last two albums, Twilight (Planet Arts, 2010) and I Talking Now! (Planet Arts, 2009). "Blind Faith" featured its composer John Riley's strangely shimmering echo cymbal, a small sonic detail that provided an insistently alluring, ever- present atmosphere. Dedicated to Bonilla's wife, "Closer Still" was, unsurprisingly, a tender ballad, then "Elis" was penned for his daughter, smeared with a New Orleans feeling. Despite the skills of the entire quintet, it was frequently the leader's own solos that dominated in terms of authority, energy, boldness and invention. Bonilla's personality is also a great asset, in terms of immediately establishing a connection with the audience and swiftly cutting off the chains of formality.

Drummer Terri Lyne Carrington celebrated the release of her new album over two nights at Dizzy's. Her Money Jungle: Provocative In Blue (Concord, 2013) marks the 50th anniversary of the original Money Jungle (United Artists, 1963), which featured the super-trio of pianist Duke Ellington, bassist Charles Mingus and drummer Max Roach. Carrington's chosen setup facilitates an onward journey, expanding that core instrumentation with two saxophones, a guitar and extra percussion. This first set of the two nights was peppered with interpretations of the original album's compositions, augmented by Carrington's own pieces, continuing the stylistic flow.

This set found her band right at the start of its live-performance adventure, and the leader made a comment towards the end about how the music would get tighter over the next three sets. It probably would, but the players were certainly no slouches when caught in the midst of their fresh discoveries. Carrington was pretty laidback, wondering how long they were supposed to play, and what time it actually was at that point. Alto saxophonist Tia Fuller was wearing a timepiece, so all was ultimately in control. Carrington was more concerned with the timekeeping core of her heavily Afro- influenced drumming. The jazz whirlwind tumble was constantly in place, but many of the rhythmic accents sounded like they were journeying from the heart of a ritual percussion frenzy.

The first pair of tunes mirrored the opening of Carrington's album. The title cut segued into "Fleurette Africaine," which developed into a rolling drum workout with percussionist Sergio Martinez, then concluding with a swish of exotica, with saxophonist Edmar Colon taking a flute solo and Fuller brandishing tiny shakers. Guitarist Nir Felder injected a bland liquidity during the first two numbers, but then redeemed himself with a bluesy introduction to the third. Even though she's said that she views this new band and album concept as having a trio core, it was notable when Carrington, pianist Gerald Clayton and bassist James Genus banished the other players for an extended middle section. This was more like a featured spotlight than a trio-with-guests scenario. Carrington's own "Grass Roots" opened with a drum solo, then featured a rigorous and exuberant alto solo from Fuller. "Rem Blues/Music" had Ellington's poem from the original recited by Fuller, which lent an extra resonance to words that compared abstract music to fleshly woman.

It was King Crimson night at the Iridium, a few days later. Well, not exactly, but Chapman stick specialist Tony Levin's combo also features his drumming colleague in the final incarnation of that outfit, Pat Mastelotto. The third member of Stick Men is Markus Reuter, who plays what he calls touch guitar. The Chapman stick is a many-stringed guitar-bass composite, whilst the touch guitar looks like a regular axe, besides its own abundance of strings (at least eight). Both players concentrate on a technique of keeping both hands quite close to each other, mostly somewhere up on the necks of their instruments. Given that all of Levin's stick looks like a neck, we're talking about where the neck would be in our guitaring imaginations. The sight of this pair daintily stroking and pressing their strings whilst generating great storms of proggy bombast was faintly amusing. Such apocalyptic power as a result of what looked like very gentle caressing!

While the genuine King Crimsom experience lies dormant, this band provides the closest possible thrill. Levin and Mastelotto clearly want to have a touring life whilst Crimson founder Robert Fripp is in retiring mode. Reuter has perfected a stirring Fripp impersonation, replicating the bespectacled one's harshly swooping scabrous surge, that caustically cerebral head-banging complexity. The roles are not completely bass and guitar, as Levin jackknifes between high and low tones. With the added palette of looping and sampling pedals, plus Mastelotto's own electronic pads, it's often not completely clear who's making which monstrous sound. Which means that Levin could also play the Fripp role, having set down his bass line foundation.

This is not to ignore the fact that the Stick Men pens its own original material, as evidenced by the healthy chunks lifted from its new album Deep (Self Produced, 2013). The trio continues the Crimson concept, but it's refracted through its own composite lens. The new pieces included the fiercely angular "Nude Ascending Staircase," "Hide The Trees," and "On/Off," along with the more reflective "Crack In The Sky" and virtual mini-suite "Whale Watch," cinematically narrative in nature, and broodingly dramatic.

Unavoidably more exciting was the inclusion of Crimson pieces from wildly different eras, "Red" and "Industry," plus a solo Fripp tune, "Breathless," from his Exposure (EG, 1979). The other cover was a uniquely surf-rockin' interpretation of Stravinsky's "Firebird Suite," which ended up as a barn dancin' hoedown number. Audiences were crammed in for both sets, and this is a band that still sells CDs in copious quantities, particularly if the personnel are on hand to sign the artifact and chat with the fans.

This was the ultimate blend of visceral rock savagery and complex thematic convolutions, perhaps with a frisson of retro-prog pomp, but usually reeling with a vital now-ness, a palpable sense of committed urgency.

The following night at the Iridium, there was a similarly crowded audience scenario, though oddly concentrated on the first set. Chicagoan bluesman Otis Taylor doesn't often set foot in NYC, so this was no surprise. The second set had a sparser attendance, but these varied head counts ended up having a noticeable effect on the nature of each performance. It was instructive to catch both sides.

Taylor is known as a multi-instrumentalist, but with this latest version of his band he's concentrating on guitar. Even though he said that one of his axes possesses a distinctly banjo-esque sound, this wasn't particularly apparent when he began to play the instrument. The emphasis was certainly on the guitar, as Taylor's regular sideman Shawn Starski was joined by the guesting Mato Nanji, from the South Dakota blues band Indigenous. Nanji has collaborated on Taylor's new album, My World Is Gone, (Telarc, 2013), as a co-writer as well as performer. Nanji's phenomenally scorching solos frequently took center-stage, but Taylor also licked out repeated old school bluesman phrases. His own spotlight solo moment arrived during a harmonica walkabout around the club's tables.

Taylor and Nanji traded vocals on an unusually episodic reading of "Hey Joe," which also featured a striking violin solo by Anne Harris, a constantly energetic presence in the band. Her special request was to revive "Absinthe," a hoary old song from the years gone by, which turned out to be a wise choice indeed. Although soloing the least, guitarist Starski also took a few prime moments in the spotlight.

For the first set Taylor fed off the energy of the capacity crowd, delivering some truly crazed, massively meaty blues-rock nuggets. The second set was calmer, and the audience banter was reduced in favor of a getting-down attention to hard-ass playing. The current combo has a larger-than-life aspect that crumples most other contenders into the dust. Taylor is presently looking towards a fearsome blues-rock strength, almost as a reaction to some of his recent rootsy banjo/mandolin country blues projects. He is a master of both approaches.