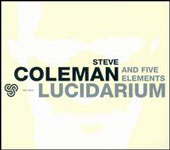 Steve Coleman's latest tablet from the mountain top finds him back with a large group performing even larger conceptual compositions, augmented by voices and rappers. Besides group improvisations, Coleman also abandons pitch in places and continues to work within signature structures and rhythms. Gathering a stellar group of musicians while obsessively pushing himself and everyone else past imagined limits creates a uniquely inspired program of music fraught with meaning and melody.

Opening with otherworldly vocals, Meditation on Cardinal 137 moves at a lazy mid-tempo with Perez and Terry busy on percussion. Taborn stabs piano accents; Rave Coltrane and Coleman contribute low-key variations haunted by the wordless chorus. Maneri, Leong, and Gress arco out of time. Perez's emphatic percussion grounds the floating voices and horns for the first half of "Kabbalah. Once the rhythm kicks in, Coleman dialogues with a trumpet, his precise intonation occasionally slipping around the edges to nudge pitchless playing. Maret and Taborn duet with Taborn prickly and Maret slippery on "Beyond All We Know, an old composition that originally appeared on Black Science. Coleman states the theme with the string trio bowing portentously, and the piece quickly builds to a slow-moving group improvisation.

First percussion with piano then a vocal trio, the two Diasporatic Transitions create brief interludes dissolving into the ambitious "Egypt to Crypts in Hieroglyphs. An amorphous intro snaps into discipline with an amusing vocal arrangement supporting Kokayi's deep thoughts. Doug Hammond's "Perspicuity gives Coleman and Alessi room to roam, as well as giving Taborn a rush of expression. Maneri deeply ruminates on the riff before the abrupt end.

Still without an American label, Coleman has found a crucial place to document his restless creative search on France's Label Bleu. Lucidarium continues to argue for Coleman's inclusion in an elite circle of jazz theorists and performers whose unwavering vision are changing the music and listeners forever.