Terry Allen: Lubbock (on everything)

By JAKOB BAEKGAARD
October 6, 2016
Sign in to view read count 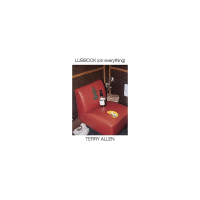 It was the poet William Blake who wrote about seeing "a world in a grain of sand and a heaven in a wild flower." The idea that something common can reveal a complex world of beauty is also pursued in singer/songwriter and artist Terry Allen's masterpiece Lubbock (on everything) (1979).

It is an album that is specifically local, revolving around Allen's hometown Lubbock, and yet it is universal and transcends time and place.

The album's 20 songs are divided into different categories: Lubock landscape and portrait songs, art world (and French) songs, drinking and food (ingestion) songs and miscellaneous songs. The songs are filled with stories from everyday life, for instance a meeting with a waitress, but also observations on the role of art.

The music is driven by Allen's ragged, rhythmical piano playing and distinctive voice. The arrangements are both bare-boned and yet sophisticated, with surprises throughout from brass voices, choir and violins, supplementing the steady rhythms of piano and drums. The country instrument par excellence, the steel guitar, also creeps in and Allen's special brand of country music has actually been called a precursor for the alternative country movement.

However, Terry Allen is his own man and Lubbock (on everything) is its own world. Now it is reissued in an awe-inspiring package from Paradise of Bachelors with beautiful pictures, well-written essays and an interview with Allen that provides an oral history of the album. If anyone was in doubt from the start that Lubbock (on everything) was a work of art, they shouldn't be now.