By WOODROW WILKINS
December 24, 2008
Sign in to view read count 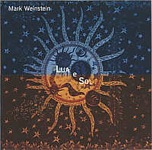 It's fitting that flautist Herbie Mann is one of the luminaries who have led bands that included Mark Weinstein. Among his many attributes, Mann had a special way of bringing Brazilian music into his repertoire, and Weinstein does the same here with Lua e Sol.

Weinstein began his career as a trombonist, and was associated with a long distinguished list of musicians, among them Eddie Palmieri, Chick Corea, Cal Tjader, Tito Puente and Mann. Over the years however, he switched to flute and now plays in a variety of styles. The small ensemble backing him on Lua e Sol is comprised of Romero Lubambo on guitar, bassist Nilson Matta and percussionist Cyra Baptista.

"Floresta," penned by Matta, begins slowly with both Lubambo and Weinstein playing softly with subtle assistance from bass and percussion. Then, after the tranquil introduction, Matta begins an upbeat rhythm soon joined by Baptista who contributes, in addition to congas, sounds that bring to mind a South American rain forest. The track is an audible sightseeing tour about the Brazilian countryside—a tour that ends the same way it began: quietly.

The title song, written by Weinstein, features some shrill peaks by the flutist alongside emphatic plucking from Matta. This free-wheeling piece conjures images of encounters with native tribes, exotic animals and even the rainy season—if "Floresta" was a tour, "Lua e Sol" is an adventure through the same rain forest. During Lumbabo's solo, Matta seemingly goes in his own direction while Baptista delivers the appropriate effects. Then the three of them feverishly pick up the action, complete with some wordless vocal calls, before things settle down and Weinstein returns with the melody. "Emorio," by two of Brazil's more widely known songwriters, Joao Donato and Gilberto Gil, is a charming piece. Weinstein employs the bass flute, followed by a snap-string solo by Matta. Lubambo also solos.

Only three of the ten songs on Lua e Sol are originals. The rest are Weinstein's interpretations of songs by several Brazilian composers. The result is as the name implies: a musical exploration of light and dark.