By JEFF STOCKTON
April 6, 2003
Sign in to view read count 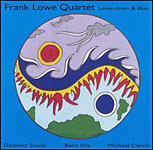 When Frank Lowe plays his tenor saxophone, you get the sense that just as much effort is being spent on holding back as there would be in pouring it all out. That doesn't mean the total effort is less, merely that Lowe's restraint allows the listener some space to enter the tunes.

On Lowe-down & Blue, the Frank Lowe Quartet delivers straight-ahead jazz, usually tasteful and spare, occasionally free, but always honest and swinging. "Who Does She Hope to Be" is a gentle tone poem defined by Lowe's fragility as he flutters the reed in a whispery vibrato at the end of each statement. A hypnotic motif is repeated until it transforms into a solo by drummer Michael Carvin, who rides the cymbal to sound like crushed ice shaken in a paper cup. Bassist Dominic Duval plucks extravagantly on "Riff Raff" and bows energetically on the improvised "Waiting in Sorrow," while guitarist Bern Nix chimes in with appropriate, ringing chords.

Lowe's new release offers tributes to Dewey Redman, Don Cherry, and Patsy Cline, whose vocal on "Crazy" is echoed by Lowe's tenor. In tribute to Pharoah Sanders on "Little Rock's Lament," Duval begins with a Pharoah-esque modal bass intro while Lowe counters with a brief relaxed statement of the melody, before he hands it off to Nix, who wastes nothing on guitar. Nice... easy... then Lowe roars back with free honking that's startlingly effective in such a setting, as if the proceedings threatened to be a bit too sedate. Duval's bass digs deeply, first in support of Lowe, then solo, then to re-establish the melody. A marvelous piece.

The liner notes emphasize the CIMP environment that characterizes this session and gives the label its name. The sound is alive, raw and unadorned, and the immediacy grants the listener the privilege of sitting in the room with four players whose generosity and skill saturate the air. As the notes say, "What you hear is exactly what was played." Lowe-down & Blue is remarkably vital.