By NENAD GEORGIEVSKI
January 1, 2015
Sign in to view read count 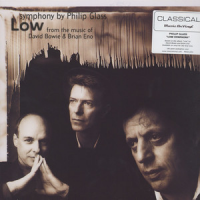 Back in 1977 singer David Bowie released two groundbreaking records, Low (EMI, 1977) and Heroes, (EMI, 1977) which together with Lodger constitute (EMI, 1979) a famous triptych of records or the iconic Berlin Trilogy. It was during this period that he created some of the critically most acclaimed and forward looking music (but commercially less successful) of his entire career. Inspired and excited by the new electronic music coming from Germany (like Neu, Kraftwerk, CAN, Cluster to name but a few) and the classical avant-garde (especially the minimalist composers Philip Glass and Steve Reich), together with composer and ambient pioneer Brian Eno and producer Tony Visconti, he created music that not only was the sign of the times it was made in, but it also signaled to the future thus paving the way for an avalanche of generations of musicians and DJs who aspired to create electronic music.

15 years since Low was first released, composer Philip Glass revisited some of the material from this record. It should be noted that this is the first vinyl edition of this record as initially it was a CD only release. Characteristically for Glass, all throughout his career he has expressed openness to musical experiences and has found inspiration in some of the most unusual places. For the Low symphony he transformed three tracks from this watershed record into masterly symphonic sketches. He took the themes of the "Subterraneans," "Some Are" (released for the first time as a bonus track in 1992) and "Warszawa," and reformulated the elements of these compositions and incorporated them into his own vocabulary.

What the Low symphony showed and confirmed was Glass' interest in the avant-garde he has helped shape. Both Bowie and Eno have cited Glass' influence on their music, and back in 1971 they both attended Glass performance of Music for Changing Parts (Nonesuch, 1970) at the London's Royal College of Art and obviously it had profound influence on their work, especially Eno's. The instrumental side to Low brought the influences of Eno's ambient music and Minimalism to mass audiences. What many other would do if they were in Glass' place was to arrange these motifs note by note and using a grandiose instrumentation. But Glass has used these themes and elements as a platform and he extended and enriched the compositions both harmonically and melodically. He succeeds in reinvigorating the original melodies by spiking them with a dose of contemporary darkness. Part of the fun of this album is that the ears play tricks with the memory of the original. Some of the familiar melodies do unexpected things and as a result to that the listen is full of interesting delights. Since this is a first vinyl edition, a care has been taken for a proper transfer where all of its great sonic qualities remain intact. This reissue possesses a warm tonal balance and it further emphasizes the darker tones it posseses.

On the other hand, by using conventional orchestral interpretation of the original tracks, the Low Symphony lacks the adventurousness of the originals. The success of Bowie's Low really cannot be separated from the very studio formulations that are interwoven into fabric of the original songs and compositions. The recording techniques, the instrumentation and the strategies that Bowie, Eno and Visconti used were as integral to the effect as the tunes and the lyrics. David Bowie's Low is an inspired gathering or marriage of various elements and that is the original's achievement. While the original record reflected Bowie's mood as he withdrew in Berlin from a turbulent period in his life at the time, it also reflected his interest and the excitement of discovering the new music which was happening on the cultural scene of '70s German music and the American avant-garde. Low Symphony doesn't carry that sense, but it carries something else, an expansion of ideas. Glass' Low symphony is a result of years of mutual influences and respect. It is not a symphonic imitation, but a form of collaboration and expansion, and a separate work of its own.

Subterraneans; Some Are; Warszawa.