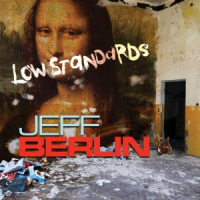 Indeed, bassist and educator Jeff Berlin is a modern era pioneer amid accolades that have piled high, spanning several decades via his astounding technique and contributions to progressive-rock, jazz fusion and modern mainstream jazz. Following up his jazz trio outing High Standards (2010, M.A.J. Records) also featuring bassist, pianist Richard Drexler, the core differentiator on Low Standards is that renowned drummer Mike Clark takes over the drum chair from Danny Gottlieb. Yet Berlin's game-plan is similar as Drexler uses the bass for a support role while toggling between piano duties. Nonetheless, the star of the show and lead soloist is Berlin, performing exclusively on electric bass.

Naturally, the lower register is a defining denominator throughout these works by Carla Bley, Wayne Shorter and other famous jazz artists. But the leader's supercharged articulations are irrefutable points of interest. His stunning bop phrasings and piano-like soloing jaunts are most notable on the trio's rendition of pianist Bill Evans' "Very Early."

Clark underscores the grooves with his soft brush strokes, where Drexler multitasks as the pianist and also provides the walking bass notes. Here, Berlin shrewdly injects Evans' eloquence and warmth, generating a persuasive set of contrasts, especially when Drexler mans the eighty-eights. Ultimately, there aren't a whole lot of bassists who can sustain interest within this type of format, although Berlin offsets the linearity of a bass serving as a lead instrument by extending this platform into a not-for-bassists-only type musical banquet.