By DAN BILAWSKY
December 27, 2012
Sign in to view read count 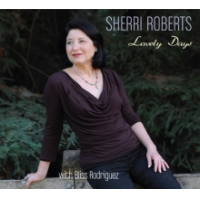 Sherri Roberts has built her reputation with a trio of well-produced albums featuring top-notch players like pianist Mark Soskin, saxophonist Phil Woods and bassist Harvie S, but her fourth album finds the Bay Area-based vocalist expanding her horizons by trimming down the personnel list. Lovely Days gives Roberts a chance to work in a more open environment that highlights the interpersonal relationship that exists between singer and pianist.

Roberts has maintained an on-again/off-again gigging relationship with pianist Bliss Rodriguez over the past six years, and their chemistry is evident from the get-go on this delightful duo date. The usual suspects, from Irving Berlin to Hoagy Carmichael, all make an appearance here as this well-matched pair walks the jazz/cabaret line with class and charm.

Roberts has often been compared to less-is-more vocalists like Helen Merrill and Julie London, and it's easy to see why. She's not prone to vocal hyperbole or exercises in excess and her theater background taught her to serve the song and lyrical intentions of the writers. Her personality naturally comes through as she sings and inhabits the roles that exist within each story, but she doesn't try to make the song a subordinate to her own being. This occasionally puts her in the awkward position of being at odds with definitive interpretations of songs, as on "Nice 'N' Easy," where she strips the Frank Sinatra-esque hipster-isms from the piece and gives it a benign baring. Elsewhere, her down-to-earth delivery helps to sell a song, as with her unaffected take on "Heart And Soul."

Throughout the program, Rodriguez comes off as equal partner rather than accompanist. Too many vocal-piano efforts come with the caveat of having too much in the vocal department and not enough in the piano area, but that's not the case here; Rodriguez gets his due and provides the perfect settings within which Roberts can work her magic. His small recording résumé has kept him out of the spotlight over the years, but he's established himself as a veteran singer's pianist for those in the know. Regional favorites like Laurie Antonioli have called on him to play in the past, and vocalist Roseanna Vitro has been singing his praises for years; she even featured him on her debut, Listen Here (Skyline, 1985).

Both parties' mellow sensibilities meld perfectly on the majority of these tunes, but the real highlights come just past the album's midpoint. "Our Love Rolls On," "I'm All Smiles" and "Come Dance With Me" find this pair at the peak of its interpretive skills. One or two numbers seem ill-fitting for Roberts ("What'll I Do") or are undersold on an emotional scale ("We Kiss In A Shadow/I Have Dreamed"), but the majority of this material has a melodic and emotional directness that makes it highly appealing. Roberts and Rodriguez have created a recording that's at once both intimate and wholly open. Hopefully Roberts and Rodriguez can keep recording, and build on what they have started here.

It’s a Lovely Day Today/ Isn’t it a Lovely Day; Nice ‘N’ Easy; Soon It’s Gonna Rain; Heart and Soul; We Kiss in a Shadow/ I Have Dreamed; Our Love Rolls On; I’m All Smiles; Come Dance With Me; Like A Lover; Moon River; Hit The Road To Dreamland.