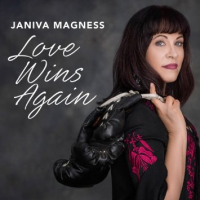 There are those whose course in life was altered as music intervened, taking them in another direction. Janiva Magness was headed down a long hard road, when, as a desolate teenager, snuck into a nightclub, and got blinded by the blues. There were the obligatory lean years of paying dues before releasing, "More Than Live" in 1992. Ten albums and twenty-odd years after that, Love Wins Again reveals the singer as a woman brimming with confidence and gratitude for the life music chose for her.

Though recognized and awarded as a contemporary blues vocalist, she can flow within a variety of genres. Magness has mellowed as her last few releases have shown, not suggesting that she has lost her edge, but that she is comfortable in her role as a woman who has lived a full life, reflecting and acting accordingly. This is her fifth collaboration with producer/songwriter Dave Darling, who has done a magnificent job in crafting the songs around her earthy voice, and personal experiences. She is the rare singer that transforms the song into her story, offering the audience a glimpse inside.

The title track is an upbeat soul inflected message of positivity, leading into the funky "Real Slow," before mellowing with "When You Hold Me," a mid-tempo romancer. The gospel brightens up "Say You Will," an inspirational chorus praising hope and belief, which carries over into "Rain Down." Magness made her bones singing heartbreak ballads, and "Doorway," is one of those, as is "Just Another Lesson," an acoustic tinged blues which she sings as if looking back over her shoulder. The only cover is a gritty version of John Fogerty's "Long As I Can See The Light," where she gets to show her power and ability to turn a song around.

Magness wrote the poignant lyrics to "Who Will Come For Me," a somber tale of a woman whose life and youth were spent on stage; regrets fading long ago, she keeps her hopes and expectations alive. Janiva Magness has succeeded with her innate ability to crawl into that dark place where people hide, find the pain and sorrow, and hang it out to dry, desperately resonating in the lives of others. That's what makes her so good.

Love Wins Again; Real Slow; When You told Me; Say You Will; Doorway; Moth To A Flame; Your House Is Burnin’; Just Another Lesson; rain Down; Long As I Can See The Light; Who Will Come For Me.