By EYAL HAREUVENI
January 26, 2009
Sign in to view read count 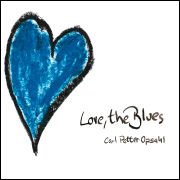 Love, The Blues is the third part of Norwegian priest and clarinetist Carl Petter Opsahl's trilogy, and is dedicated by him to God. A deeply moving treatise on the blues, this is not blues in its traditional and well-trodden scales and rhythms—even though Opsahl began his professional career as a musician in New Orleans, and even became a member of the All Star Brass Band—but blues in its innermost essence. This is blues as a music of transforming belief, as a spiritual genre that speaks about the daily miseries of life, but also a genre that represents the overcoming of these challenges to make us more compassionate, thoughtful and peace-seeking human beings. Or as Opsahl puts it, "incarnation in a blues perspective."

Opsahl says that the compositions on this part of the trilogy were inspired by the people that he has met in his work as a street minister. These include the homeless, refugees and immigrants—people who have experienced hardship, despair and pain, but are still hopeful and love their life. And love, as Opshal affirms, is the healing force of the universe.

The first part in this trilogy, Indigodalen (Indigo Valley) (Heilo, 2001), dealt with inspiration; and the second part, Improvisations (Park Grammofon, 2005), dealt with the creative process. Opshal is joined on the third part of the trilogy by renowned pianist Tord Gustavsen, who also played on Indigodalen, and veteran drummer Jon Christensen. Both players engulf Opshal's lyrical playing with great sensitivity.

On the opening "Dance The Soul," Gustavsen's percussive tapping on the piano frames Opshal's contemplative playing on bass clarinet, adding a ceremonial structure to this universal prayer. Both sound as of one mind on the open-ended improvisations "Sense/Less I" and "Improvisation XV," patiently completing and commenting each other's ideas, and often implying rather than fully stating these themes. Christensen's spare drumming on the latter piece charges the musical palette with more nuances.

Gustavsen's solo piece, the slow and melancholic elegy "Sense/Less II" is simply one of the most beautiful and touching in his entire impressive resume. When Opshal joins the pianist on the folk-tinged "Langt Borte, Men Her," the two dance around each other. Only on the title piece does Gustavsen's playing reference the blues scale briefly, but Opshal's crying clarinet leads in a typical, familiar blues form.

"Immigrantvisa" is a slow, minimalist and somber duet, where each note—and the silences between those notes—has equal importance and emotional impact. The somber atmosphere is exchanged for a more hopeful mood on the playful Christmas dance, "Flesh Made Song," as well as the passionate trio improvisation, "In The Beginning Blues," where Opshal's clarinet represents the voice of an ardent preacher. And on the heartfelt and majestic conclusion "Love Distance," Opshal and Gustavsen manage once again, with minimal like-minded gestures, to have an uplifting emotional impact.