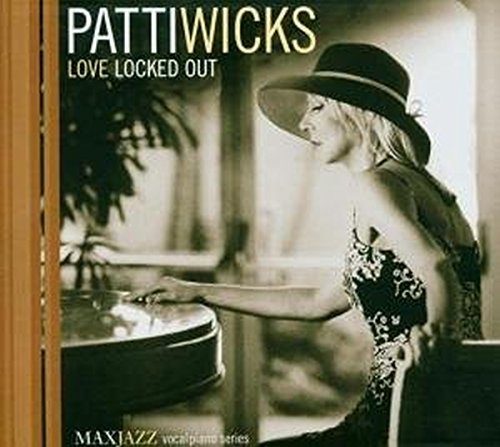 The term “torch singer” isn’t heard much nowadays but it’s an apt description of Patti Wicks, who sings from the heart, not the ego—and plays great piano too. She’s at her best on this album of sad-eyed ballads that, in her words, “expresses the driving force of all humanity, the need and desire to love and be loved.” The moods of love vary from euphoria to heartbreak, and it is the latter emotion on which most of these songs are based. Wicks’ husky voice and unassuming style are perfectly tailored to express that painful sentiment, and she gently summons the listener to feel the sadness and the pain in every lyric.

Unlike most other contemporary singers (those who have read my reviews know how I feel about them as a whole), Wicks doesn’t bend or alter a lyric to suit her purpose, nor does she forswear passion for pyrotechnics. She simply sings, allowing the words to flow freely from a wellspring of knowledge and experience that is known as living. Her range is somewhat limited, leading one to wonder if she’ll be able to reach that next note, but she always does. In that respect, Wicks reminds me of Fred Astaire, Louis Armstrong or Jimmy Durante, three others whose voices seemed unfit for singing—until one heard them sing. As each of them proved, and Wicks affirms, when it comes to getting the most out of one’s pipes, there’s a lot to be said for sincerity and soulfulness.

Besides singing and playing marvelously, Wicks has a knack for uncovering and burnishing long-neglected nuggets, and there are a number of them here including Cole Porter’s “After You,” Ray Noble/Max Kesler’s “Love Locked Out,” Luiz Bonfa/Dick Manning’s “An Empty Glass,” two gems by Duncan Lamont, “Where Were You in April?” and “I Told You So,” and two more by Cy Coleman (“On Second Thought” and “Would You Believe?“) More familiar but no less charming are Rodgers and Hart’s “It Never Entered My Mind,” Tadd Dameron’s “If You Could See Me Now” and Bob Russell/Lester Lee’s “Blue Gardenia.” Wicks is accompanied on most selections by bassist Keter Betts and drummer Joe LaBarbera, who do what is necessary while keeping a decidedly low profile, as befits the album’s wistful makeup.

In reviewing one of her earlier albums ( Room at the Top ), I portrayed Wicks as “an uncommonly gifted Jazz pianist who deserves far wider recognition and applause than she’ll probably ever earn.” Aside from amending the description to read “pianist-slash-singer,” that opinion remains unchanged.

Love Locked Out; After You; I Have the Feeling I