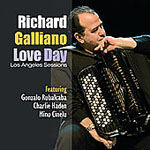 French-Italian accordionist Richard Galliano began recording for the Milan label in the mid-2000s, since when he's released two tango-based albums, Luz Negra (Milan, 2007) and Live In Marciac (Milan, 2007), made with his Tangaria Quartet. Galliano's Love Day: Los Angeles Session finds him returning to another love, new musette, a jazz-inflected recalibration of the bal-musette cafe music developed by French and Italian musicians in late 19th century Paris.

Love Day: Los Angeles Sessions is bal-musette with a further twist though. Throughout his substantial discography, Galliano has recorded, in the main, with European musicians. On Love Day he's chosen a line-up of American or American-based musicians—pianist Gonzalo Rubalcaba, bassist Charlie Haden and drummer Mino Cinelu. None of these players have any sort of history in musette, new or traditional (including French-born Cinelu).

It's not the first time Galliano has recorded with a US line-up, and it seems to be a context he's growing fond of—Love Day follows close after Ruby My Dear: New York Trio (Dreyfus, 2004), made with bassist Larry Grenadier and drummer Clarence Penn, and L'hymne a L'amour (Cam Jazz, 2007), made with Penn, vibraphonist Gary Burton and bassist George Mraz. These albums mark an internationalisation of new musette together with a stronger embrace by Galliano of the American jazz tradition.

Anyone hoping to find a touristic aroma of Gauloises cigarettes, pastis and onion soup in Love Day will be disappointed. Others, who love tuneful chamber jazz, will find much to enjoy. The tunes, all written by Galliano, are undiluted new musette, pretty and in the main moderately paced. Some are of singular beauty—"Aurore," "Hymne," "Serenite" and "Poeme" stand out—others are less memorable, more musette-generique. But the playing, as you'd expect from a line-up like this, is consistently on the money, the coin in question being gentle lyricism. Galliano and Rubalcaba are the soloists, turning in mellifluous improvisations on most tracks; Haden and Cinelu are an unobtrusive but virile pulse.

The album was recorded over three days in April, 2008 at Capitol Records Studios in Los Angeles, and Galliano's growing embrace of Americana is made plain in his liner notes, which talk of the studios as "a mythical place...still filled with the vibrations of...artists like Nat King Cole (and) Frank Sinatra."

It doesn't take many risks and, like Cole and Sinatra, it is unashamedly easy on the ear, but if you're in the mood, Love Day will ring your bell.