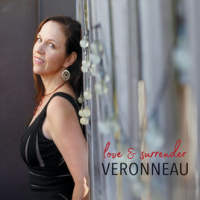 There is something quite intoxicating about the Latin genre of music—from samba, to bossa to choro and beyond, the rhythms are infections and memorable. Veronnea, named after its dulcimer toned vocalist Lynn Veronneau, is an acoustic based ensemble featuring the core members Ken Avis on guitar, backing vocals and harmonica and David Rosenblatt also on guitar. The trio creates the foundation upon which many talented friends and special guests build up. Joined on this album by Bruno Lucini on drums and percussion, Dave Kline on violin with special guests, Etu Dieng electric bass on "Song of Love," and "Love & Surrender," Tommy King on accordion on "La Javanaise," and "Perfidia," Amadou Kouyate on Senegalise 21 string traditional harp on "Love & Surrender," with John Previti on upright bass on "The Road," "Love and Surrender," "La Javanaise," and "September Moon," JP Silva joins in on 7 string acoustic guitar and vocals on "Voce Abuso/Fais Comme L'Oiseau."

The breezy easy-going style of "Love & Surrender," the title track, could easily be heard on jazz, world and pop radio stations. Its rhythms are clearly based in the Latin idiom yet is has an effervescence of adult easy listening. One could argue so does bossa nova, as surely countless dinner parties have been thrown where bossa nova has been mingled in with adult contemporary tunes. It's clear the Latin-based genres have a universal appeal. This is an original for the group, the tune sparkles with a catchy melody that lingers well beyond the end of the tune, this signals strong songwriting, laden with solid melodic hooks.

Supporting the Latin sound is the timeless tune "Perfidia," performed by the likes of Linda Ronstadt from the movie Mambo Kings (1992), or sung by the Modernaires, on The Modernaires—A Salute To Glenn Miller (Decca, 1954), the tune was originally written by Mexican composer Adalberto Dominguez, and Veronneau does a magnificent job of giving it an airy and meaningful reading. Vocalist Veronneau has a gorgeous instrument in her voice, and it is very suited for this style of music, her articulation of the Spanish language is pristine and warming.

But wait, this is not only a Latin album, its elements reach far beyond the Latin genre with the delightfully wistful French tune "La Javanaise," also sung to perfection. Veronneau is a French-Canadian artist, and the inclusion of this tune is a testament to her versatile style and abilities. The tune has a charming acoustic sound masterfully provided by Avis and Rosenblatt and joined by violinist Kline and accordionist Tom King. Another beautifully conceived mash-up of France and Brazil is superbly portrayed on "Voce Abusou Fais Comme L Oiseau," sung in Portuguese by Silva who also lends his 7-string talents to the tune as vocalist Veronnea sings in French. The two vocalists shine together with brilliance, their voices blending flawlessly as they weave between the two dialects, at times singing in both languages together.

Love and Surrender is kaleidoscope of internationally flavored tunes. A cornucopia of varied instruments and textures, taking the listener on a multi-lingual journey. The group is well-oiled and well-versed in the varied styles, adding a mix of well-penned originals to well-researched covers, their latest album is a leap forward in an ever-growing discography for Veronneau.

Song of Love; Love and Surrender; The Road; La Javanaise; September Moon; Perfidia; Spring Can Really Hang You Up the Most; Moons a Harsh Mistress; Voce Abusou/Fais Comme L’Oiseau ; Waltz for Youssef.