By CHRIS MOSEY
September 11, 2013
Sign in to view read count 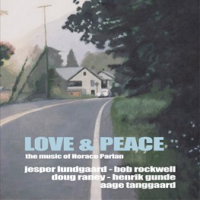 Maybe it was the mournful sound of the foghorns belonging to the ships passing below the Great Belt Bridge. Or the music he'd just been listening to, and featured on this album. But Harold Parlan's thoughts strayed from the care home where he now lives in the small Danish coastal town of Korsør (pop. 14,501) to Rudy Van Gelder's studio at Englewood Cliffs on the New Jersey shoreline.

"It was like recording in someone's living room," he says, recalling those Blue Note sessions. "We weren't separated. There were no headphones. We were set up almost as if to play a gig, with the rhythm section in a kind of circular formation, and the horns facing it. You were a part of what was going on."

In his eighties, plagued by diabetes and failing eyesight, Parlan no longer plays piano. But on this occasion other people had arrived at the care home to play his songs for him, both those he wrote for Blue Note and those penned after coming to live in Denmark in 1973. As he reminisced, his remarks were captured on tape and later became the final track of the album.

It's an interesting, low-key session. No overblown showbiz tribute. Bob Rockwell, an American partially based in Copenhagen, plays robust, no-nonsense tenor and there's a chance to hear that fine, swinging and much neglected guitarist Doug Raney on five of the ten numbers.

Pianist Henrik Gunde makes no attempt to imitate Parlan's style; that would be impossible. With a right hand crippled in childhood by polio, Parlan invented his own technique. Jesper Lundgaard's powerful bass knits everything together.

The proceedings get underway with "Speaking My Piece," a soulful, catchy and very Blue Note number written for brothers Stanley Turrentine and Tommy Turrentine. Then there's "After The Gig," which Parlan says reflected "my happiness at being home in New York after a horrible week with Roland Kirk."

The title song was written in 2000. Here, Parlan reflects on the two elements he feels essential when composing music.

The band left Korsør and returned to Copenhagen to put the finishing touches to this respectful but essentially friendly album, leaving Parlan sitting listening to the passing ships, alone with his memories.

Speaking My Piece; Up In Cynthia’s Room; Return Engagement; Love & Peace; Waltz Number One; Back From The Gig; Billy’s Bossa; A Happy Frame Of Mind; Low Down; Up And Down; H.P. Interview.