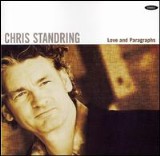 Once upon a time Wes Montgomery plugged in his guitar and changed the way the world listened to jazz. Since then the guitar pick has been passed on to artists including George Benson, Earl Klugh, John Scofield and Pat Metheny, and each and every one has pushed the genre just a little bit further.

With Love and Paragraphs, guitarist Chris Standring makes a fair bid to push it the next step forward. This is as close to being a perfect album as any released in 2008.

The production values of a recording usually aren't considered among its key selling points, but they are here; the album sounds terrific. Whether heard in a car, on a computer or a stereo system, the work of Standring and co-producer Rodney Lee (who also plays keyboards in Standring's band) just dazzles. Lee's mix features Standring's guitar but, unlike too many recordings where the featured instrument gets pushed up front to the point where the rhythm section barely buzzes in the background, the bass isn't lost in the mix, the keyboards absolutely sparkle and the drums vary from up front and kicking to deftly keeping time.

Standring isn't so much the star of the show as the leader of the band, encouraging terrific performances from all the contributors, especially bassists Rico Belled and Andre Berry, drummers Eric Valentine and Dave Karasony, and Lee's tastefully restrained keyboard embellishments. Guest performances from keyboardist Jeff Lorber and saxophonist Everette Harp are perfectly at home in the cool groove established.

There are ten tracks on Love and Paragraphs and all ten of them are winners. From the stomping opener, "Qwertyuiop," to the meditative closer, "Reflection," there isn't a single throwaway moment on the album. Some artists go into the studio with 45 minutes worth of record to fill and only 30 minutes worth of good music. Standring doesn't bring anything less than his best to the entire session.

The title track is based on Standring's e-mail encounters with fans frustrated by his brief one-liner replies, leading one woman to chastise the guitarist upon meeting him, declaring, "You owe me paragraphs!"

That somewhat cheeky fan should be very pleased to know she inspired Standring to deliver his most fully accomplished album yet and simply one of the most listenable and outstanding albums of the first half of 2008.

Qwertyuiop; Love & Paragraphs; As Luck Would Have It; Have Your Cake and Eat It; Liquid Soul; Ooh Bop; C.S. in the Summertime; That's What I Thought You Said; Qu'est-ce Que Tu Fais?; Reflection.