To steal a phrase from Marlon Brando, Louis Smith coulda been a contender. He was every bit as good as any trumpeter in the 1950s Blue Note stable. 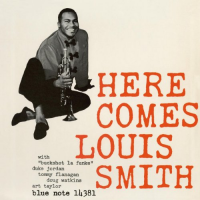 I'm not a musical snob. I'm not a guy to drop obscure musical names to impress friends and hipsters. But when I come across a name that is undeservedly obscure, I don't mind shouting it out the window.

So here's my shout for today: Louis Smith!

Chances are you've never heard of Louis Smith. You should. He put out exactly two albums as a Blue Note bandleader, in 1957 and 1958, then disappeared for the next 20 years. Here Comes Louis Smith is his debut, followed a year later by Smithville. Both are classics of hard bop—or should be.

Like that other trumpet-playing Louis—the polar opposite of obscure—Smith had a strong, confident tone. Listen to the first 40 seconds of the first song on his debut album: "Tribute to Brownie"—a shout-out to trumpet legend Clifford Brown, who died a year earlier.

It's a fantastic introduction to a fantastically underappreciated talent. Five more songs follow: a smoldering blues ("Brill's Blues'), an incendiary bebop original by Smith that could have been ripped from the Bird-and-Diz canon ("Ande"), a languid "Stardust," a mid-tempo original bopper ("South Side") and finally a scorchingly fast, misleadingly titled original called "Val's Blues." Blue it may be, but the tempo is a hard gallop and Smith is flawless.

To steal a phrase from Marlon Brando, Louis Smith coulda been a contender. He was every bit as good as any trumpeter in the 1950s Blue Note stable. Instead, after just two records, he went back to teaching and did not re-emerge until the 1970s, and then only for two more records. He recorded a few more in the '90s and died in 2016.

The world is full of could-have-beens. In the jazz universe of the 1950s, Louis Smith is very near the top of my woulda-coulda-shoulda list. We'll never know what gems we missed because Smith chose the classroom over the studio, but at least we have two certifiable diamonds. Here Comes Louis Smith is his masterful introduction.

Availability: Easy to find (isn't everything on the Internet?), but not cheap