By PETER AARON
February 8, 2005
Sign in to view read count 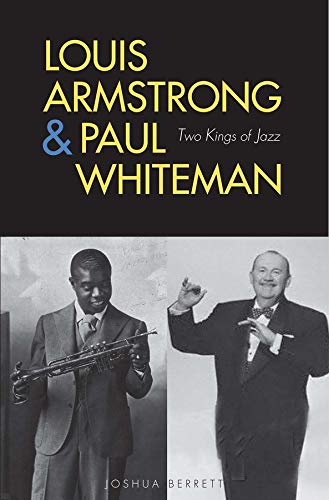 Louis Armstrong has been rightly hailed as the most important figure in early jazz for almost as long as Paul Whiteman, once its biggest star, has been denied his due. Under the racially apologist pens of many recent music historians, Whiteman is routinely cast as the Pat Boone of jazz, the man who, under the pretense of "making a lady of jazz" by adapting it to the then prevailing symphonic form — thus creating a wholly unique form, separate from either jazz or symphonic styles — whitewashed the music into an effete, harmless version designed to appeal to middlebrow audiences.

While such arguments can certainly be made, the fact remains that by taking the jazz to the people, Paul Whiteman did more to help its cause than Armstrong or any of his cutting-edge peers were able to do in such a racially backwards time. So even though Whiteman's music may not have been "pure jazz" (what is, then as much as now?), its very popularity helped "legitimize" Armstrong and led many to discover and appreciate his more raw variant of jazz — much the way, several generations later, The Rolling Stones led many to the source of their music, the blues. And while Whiteman, from a privileged Colorado family, lacked Armstrong's dramatic rags-to-riches career story, the two shared several, perhaps unexpected, influences: Enrico Caruso and other opera singers, John Phillip Sousa, the Original Dixieland Jazz Band, even the sweet sounds of Guy Lombardo.

Though Louis Armstrong has been immortalized for changing the face of music via his innovations of soloing outside of arrangements, scat singing, and creation of the role of front person, Paul Whiteman's chief legacy, other than inventing symphonic jazz, is his gift for recognizing and nurturing talent. The names who passed through Whiteman's bands are great and many: Bix Beiderbecke, Frankie Traumbauer, Bing Crosby, Jack Teagarden, Red Nichols, Mildred Bailey, Steve Brown, Red Norvo, Jimmy and Tommy Dorsey, Eddie Lang, Joe Venuti, Bunny Berigan, Henry Busse, Matty Malneck, Ferde Grofe. By most accounts, the musicians who played with Whiteman loved his music, in later years defending it as well as their one-time leader against the barbs of naysayers.

True, Paul Whiteman's oeuvre never touches the intensity of Armstrong's Hot Fives and Sevens, even his 1930s big band output. Very few bands ever did. Instead, the Whiteman sound largely tended toward stiff, overblown approximations of European classical styles. But, on the good end, within these often pompous exercises lay exceptional solos by the above and lesser-known names; and hey, we are talking about the man who premiered "Rhapsody in Blue," arguably the greatest piece of American music ever written. Besides, overdone as they may sound now, Paul Whiteman's pioneering symphonic exploits paved the way for all subsequent orchestral jazz works — "Charlie Parker with Strings," for one. And Whiteman also ruled the charts in trend-setting dance band sides, records full of hot solos and peppy arrangements like "Mississippi Mud," "Oh, You Have No Idea!," "Hot Lips," "San," "Wang Wang Blues." Great stuff.

Ostensibly, Mercy College music professor Joshua Berrett wrote this book with the aim of righting the wrongs done against Whiteman. By showing the artistic and career parallels of Armstrong and Whiteman — both called "King of Jazz" in their day and both known as "Pops" to their employees and fans — Berrett attempts to put them on equal footing, depicting the two bandleaders as twin spires of early jazz. A perhaps unrealistic but nonetheless exciting proposition, given the undeserved predicament of Whiteman's reputation. Unfortunately, Berrett loses his focus somewhere along the way, and "Two Kings Of Jazz" reads more like a collection of loosely related essays. Jumping around and around in search of a point, Berrett endlessly repeats himself, touching on the same few toeholds of similarity between our two kings, points which offer only an extremely thin case for saying Paul Whiteman's music can stand up as vital jazz next to Louis Armstrong's. Sure, the two men greatly admired each other. They drew on many of the same influences. They shared much of the same repertoire, the same arrangers, a few of the same band members. They probably even used the same brand of toothpaste. Big deal.

Frustratingly, none of that is enough to convince Whiteman's many non-believers that his recorded output has real merit. Things will always come down to the music. And while Paul Whiteman's music is marked by flights of great ambition and numerous moments of legitimate jazz, and continues to be loved by many (yours truly included), those looking for jazz's true, undistilled essence will always turn to Louis Armstrong first. Whiteman may have been the King of the Jazz Age, but Armstrong sits forever on the throne of the music itself, unassailable.

Which is not to say this book is devoid of worthwhile content. The recounting of Whiteman's inexplicable 1926 U.K. billing as "The Mussolini of the Ragtime World" is certainly surreal. The passages on far-flung Satchmo disciples Louis Bannet ("the Dutch Louis Armstrong") and Eddie Rosner ("the Russian Louis Armstrong"), along with the tales of Armstrong's brushes with racist cops in the Deep South, are fascinating. And the quotes in defense of Whiteman by Red Norvo and Duke Ellington are truly eye-opening. Anyone interested in early jazz will find it worth a look.

But it would've been really gratifying to have a coherent, well made case to throw at those who so wholly discount Paul Whiteman's importance to jazz history and what innovations he did make. Sadly, "Two Kings of Jazz," due to careless editing or perhaps an unclear agenda on the part of its author, turns out to be 250 pages of blown opportunity. Instead of foolishly trying to vindicate Whiteman by attempting to define him in the same way one defines Armstrong, Berrett should have focused on one or the other, or perhaps given them each their own half of the book. And then let someone else write it. The angle of skipping back and forth, showing how Armstrong's and Whiteman's paths crossed, both in their approaches to music and in their personal lives, could have been engaging. Instead, it's a rambling ride without a compass. And scant payoff in the way of valid lines of reasoning.

While not as extensively devoted to Whiteman, Richard Sudhalter's seminal "Lost Chords" remains the number one place to get a clear grip on the big man's true significance. As for Armstrong, there's certainly enough out there already, but Gary Giddins' "Satchmo" and Laurence Bergreen's "Louis Armstrong: An Extravagant Life" top the heap.