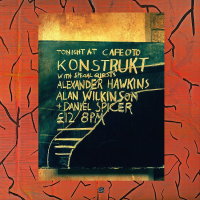 With each new Konstrukt release I get anxious, wondering just where these Istanbul musicians, and current bearers of the free jazz banner, are headed next? To our Western ears, they seemingly arrived from nowhere. Turkish free jazz, really? But it didn't take long before we became familiar with names like guitarist Umut Çağlar, saxophonist Korhan Futacı, and bassist Barlas Tan Özemek. Together with a cast of other Turkish musicians that swelled, the ensemble attracted giants of free jazz, including Peter Brötzmann, Marshall Allen, Joe McPhee, William Parker, Evan Parker and ex-Sonic Youth guitarist Thurston Moore.

Their next stop, and it appears to be a regular terminal now, is London's Café Oto. The band released the 2015 concert Live At Café Oto (Holidays Records, 2017) with Alexander Hawkins. The pianist is back for this live date, along with saxophonist Alan Wilkerson, and Daniel Spicer. Although Konstrukt invited these luminaries of the UK's free jazz scene, the music gravitates very much towards the Continent and American fire music.

Let's call them the 21st century equivalent to the Art Ensemble of Chicago. From the opening notes, Hawkins pinging the insides of his piano, the ensemble initiates a percussive panoply with an insistent pulse that travels from Eastern vibes to drum'n'bass and funk. These are cultural marauders in the best sense. Pulling jazz passages from chaos, and exhibiting free improvised quotations over orderliness. Hawkins, Williamson, and Spicer are eager participants here. Their Turkish brothers know the language. It's their accents that make the Brits conscious of the structures. Where Brötzmann introduced us to the Tárogató, Futacı sets aside his saxophones here for the double reed gralla and zurna, and Çağlar also hoists a gralla and various flutes. It's not quite befitting to say "East-meets-West" because with Konstrukt, East has been absorbing Western free jazz for the past fifty years and they're now coming to the table with the freshest and tastiest ingredients.

L.O.T.U.S. is released as a limited edition, 300 copies gatefold double-LP, 200 CDs, or as a download from Otoroku.

Side A: Free-flowing; Ararat; Side B: Konfrontations; Rumi; Domino; Side C: Bahia; Far Side Of The Mountain; Bits And Pieces; Side D: Ancestors´ Song; Exit; White Lotus.