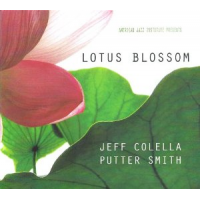 Lotus Blossom is an absorbing date that projects plaintive beauty, reflective moods, and introspective ideals. It's a meeting of two master musicians who engage in thoughtful conversation that's quietly emotive.

Pianist Jeff Colella, who's worked with everybody from vocalist Lou Rawls to arranging-composing legend Bill Holman, and bassist Putter Smith, whose credits include extensive work with pianist Alan Broadbent and a whole host of other jazz greats, weren't strangers before this recording. They'd actually been playing together, on-and-off, for two decades before they entered the studio for this session. Some successful duo dates at Vibrato—a Herb Alpert-backed jazz club in Bel Air—planted the seed for this recording, as both men, excited by their on-stage chemistry, became interested in the prospect of finally documenting their partnership. Here, they tackle eight tunes that prove enchanting and (mostly) meditative.

The album opens on Smith's lone compositional contribution—the pleasantly roaming "Desert Passes." "Time Remembered" comes next, serving as the first of three references to the great Bill Evans; the other nods—an excitable "All Blues" and life-affirming "You Must Believe In Spring"—prove to be two of the strongest performances. Other high points on the album include a soft-handed take on "The Very Thought Of You" and a gently wandering look at Billy Strayhorn's "Lotus Blossom," but pointing out a few great performances here is somewhat pointless. This is the kind of album that should be heard from start to finish. It's a work of finesse and focus that deserves and rewards attentive, uninterrupted listening.

Desert Passes; Time Remembered; The Very Thought Of You; All Blues; Candle; You Must Believe In Spring; Gone Too Soon; Lotus Blossom.