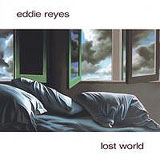 Blending musical styles requires a broad foundation in both genres, a respect for the dual set of aesthetics, and the ability to prioritize tradition amid creativity. A solid foundation in both musical styles balances influences and avoids overly simplistic sonic references. Cultural aesthetics guide musicians away from implementing styles as a novelty. Understanding tradition is the only way to create something new musically; a concrete connection to a genre's evolution adds authenticity to the creative process. Guitarist Eddie Reyes attempts to capture these elements on Lost World, an album that brings together a wide variety of Latin traditions with pop music.

Many pieces contain authentic percussion performances, yet the overlying compositions seem mismatched and unrelated. "Beast On The Moon contains bata rhythms for the Orisha Elegua which fade into a cliché minor chord foreboding, emphasized by drawn out electric guitar lines and maniacal laughing. Despite the use of bata drums, the unexpected turn into hip-hop on "OB's Groove leans towards radio-ready smooth jazz. The up-tempo rumba guaguanco "The Lost World quickly moves away from clave and into a synthesizer laden funk feel. At each song's foundation, Isaac maintains traditional rhythms, but the lack of connection with the songwriting brings a disjointed feeling.

Several pieces contain a distinct new age sound, which overrides the use of Latin musical traditions. The guitar and occasional clapping imply a flamenco background on "The Unfolding, but the reverb saturated vocals and piano noodling cloud the song's character. "Highland Conga quickly disappears into a pounding combination of Irish, Scottish, and Australian rhythms crowded with distorted guitar and processed vocals. While new age approaches may result in increased exposure, they distract from the musical traditions being explored.

Reyes displays a broad knowledge of Latin rhythms throughout Lost World, yet the styles fall into an unbalance between cultural aesthetics, authenticity, and creative liberties. Isaac admirably performs several authentic rhythms, yet the songs bear little relation to the genres. The lack of a cultural reference point forces the percussion into a textural role. The compositions' pop stylings seem forced against the rhythmic content, cheapening the lineage of both traditions. Reyes' initial concept of bringing several Latin musical styles together with original compositions, was inspired, but the lack of connection results in only a superficial completion of that goal.