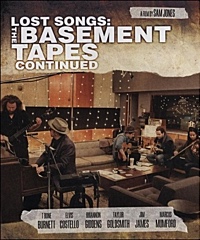 Lost Songs: The Basement Tapes Continued was originally broadcast on the Showtime network at the time of the release of The New Basement Tapes: Lost on the River (Harvest, 2014), in part to take the place of extensive live performance. In the form of DVD/Blu Ray, it serves the same purpose, as depiction of the circumstances by which the otherwise well-engaged principals —Elvis Costello, Jim James, Taylor Goldsmith, Marcus Mumford and Rhiannon Giddens—collaborated to create complete songs from a box of Bob Dylan lyrics discovered by archivists and passed on to producer T-Bone Burnett (a sideman of the Bard's from 1975's Rolling Thunder days), with the full endorsement of the author.

Bob Dylan's blessing to the project extends to voice-over at various junctures of the film which, intercut with these contemporary musicians working on instrumental and vocal arrangements compensates for the mythmaking in which filmmaker Sam Jones indulges. The easygoing interactions of respectively Mumford, James, Goldsmith, Giddens and Costello compares favorably with the informality of the sessions conducted by Dylan and The Band over a much more protracted period than the two weeks of the Burnett-supervised sessions, even including the trade-off of instruments as on the original recordings: James and Goldsmith, for instance, handle bass as well as guitar. Even Burnett allows such a loose atmosphere contrasts his usual concepts.

Such relaxed open-mindedness only heightens the contrast in the respective deliveries of the aforementioned two who, not surprisingly, develop something of a mutual admiration. But it's a tribute to Jones discerning eye (and ear given the narrative sections) that the coalescence of the core quintet appears almost imperceptibly as the film progresses. Thus, Lost Songs gains cinematic momentum as it progresses, mirroring the evolution of the recordings on which it's based.

That said, there's a definite sense that, around the hour mark, the project betrays a certain labored feel. The process of arranging and performing has already been clearly depicted by this time as has the chemistry been fully revealed at this juncture; the footage becomes increasingly redundant, particularly as the film circles back once again to touch upon the history of The Basement Tapes (Columbia, 1975). Perhaps a more linear take on a single song might've benefited this configuration, especially if the DVD menu contained an option to play the completed track(s): a half dozen of them appear as 'bonus' content (though unfortunately, neither on the package liner nor disc credits, clearly delineate which cuts appear on the CD's).

The half-dozen complete performance tracks do, however, mitigate the loss of the ever-so-casual air of the studio sessions Jones captures, at least the degree they illustrate the versatility within the five core participants even when augmented by additional percussionists, background vocalists and, on "Hidee Hidee Ho #16," actor Johnny Depp on guitar. It may or may not surprise Costello rocks on "Six Months in Kansas City (Liberty Street)," or that Goldsmith and James give the most affecting vocal performances on "Diamond Ring" and "Down on the Bottom," respectively, at least in comparison to Mumford's self-conscious but prominent presence on "The Whistle Is Blowing" and elsewhere.

Yet these segments can't help but whet the appetite for the sight and sound of this quintet in actual live performance; as improbable as that may be given their individual commitments, the initial release of the album came with the revelation there are more finished tracks than even included on its 'Deluxe Edition," so that inviting possibility remains.