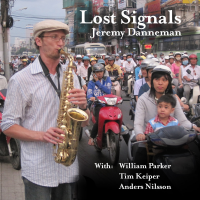 Lost Signals is the third Jeremy Danneman Ropeadope Records release from a series of sessions recorded in the fall of 2013 with bass icon William Parker, percussionist Tim Keiper, and guitarist Anders Nilsson. You might think that after culling tracks for Lady Boom Boom (2015) and Help (2015) from these sessions, that a third release might be scraping the barrel's bottom. If you did, you'd be wrong. The tracks on Lost Signals are as strong as the previous two discs.

That's because as a saxophonist, clarinetist, pianist and various woodwinds musician Danneman is an internationalist. So is his ensemble. The Swedish-born Brooklyn guitarist Anders Nilsson performs blues, jazz, world and experimental music. So does percussionist and drummer Tim Keiper, who is a member of Brazilian Cyro Baptista's bands and has performed with a diverse collection of artists from Malian Vieux Farka Touré to avant gardist John Zorn, hip-hop artist Matisyahu and indie-rock band Dirty Projectors. Of course, bassist William Parker is the epitome of a universal artist, his discography brimming with the who's-who of creative music since the 1970s.

The disc opens with John Coltrane-inspired "Trane Day" performed in trio, sans Nilsson. Keiper working mallets and bells with Parker's bowed bass sets the stage for Danneman's salute. As with Coltrane's mid-1960s output, the music is more about the journey and not the destination. The saxophonist's pursuit gives way to that of Parker and Keiper raising the meditative bar a bit higher. The profound quality of "Trane Day" is matched by the flip side piece "Pharoah," which evokes the Pee Wee Herman dance with it's rollicking flavor.

Danneman's music is spread across continents. You might hear bits of Paul Desmond's alto saxophone in a piece like "Miss Jumpy Lips," a waltz and travel to Africa with "Goat Skin Dance," featuring his hypnotic clarinet dancing above Nilsson's energized rhythms and Keiper's triangle. There are connections here to the late work of John Lurie's Lounge Lizards.

The improvised composition "Eggshell Dance" opens with clarinet, then slap-bass and brushwork that is all-at-once modern and New Orleans street corner. "Rainy Season," opening with Parker's massive bass solo, is a danceable  groove piece that dares you to sit still. The center of this release is the title piece, at 21:37, a world music marvel. Nilsson's acoustic guitar chimes over Danneman blowing various Cambodian woodwinds, Parker playing gimbri and flute, and Keiper's imaginative percussion delivers a meditative exploration of Africa and Asia.