Louis Sclavis: Lost On The Way 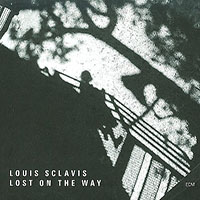 Clash of the jazz titans! Miles Davis famously remarked that the late Eric Dolphy played "like someone was standing on his feet." An uncharacteristically bad bit of timing for Davis: his comments appeared in print just after the tragically early death of the great multi-reedsman in 1964. Many years later, it is possible both to find Davis's comment kind of true and pretty funny, while still loving Dolphy's music.

Louis Sclavis has subtly, and probably unwittingly, bridged the divide between the two jazz giants on the best parts of Lost on the Way. From Dolphy, Sclavis and his confreres take the complicated, cerebral, angular melodic lines that can be heard to great effect on Dolphy's late masterpiece, Out to Lunch! (Blue Note, 1964). A second borrowing from Dolphy is his polymorphous multi-instrumentalism—although it takes two players, Sclavis and Mathieu Metzger, to stand in for Dolphy's many reed instruments.

From Davis, drummer Francois Melville lays down an insistent funk-like pulse reminiscent of the late trumpeter's under-appreciated early-'70s material, the music found on the great On the Corner (Sony, 2007) box. Funny thing about that funk: it's regular as a metronome, hypnotic, but not liberating in the way of contemporaneous real funk by Sly Stone or James Brown. The beat is nervy, tense, and a little reserved—in this way, sounding a little like drummer Hugo Burnham's beat in legendary post-punk band Gang of Four in the early-'80s.

Not all the songs on Lost on the Way feature this winning combination of Dolphic melody and On the Corner funk—but the best ones ("De Charybde en Scylla," "La doute du Cyclope," "Aboard Ulysses's Boat") do. "L'heure des songes," with its long, keening saxophone lines over a pulse-less rhythm section, leans much further in the Dolphy direction; "Bain d'Or," meanwhile, has a pronounced but non-funky beat underlying its vaguely Celtic melody.

Despite the consistent excellence of the muscular Sclavis-Metzger reeds duo and the ever-dependable drumming of Merville, the most valuable player award must go to guitarist Maxime Delpierre. A veteran of the eccentric Camisetas (Chief Inspector, 2007) collective with Jim Black and Mederic Collignon, his is a virtuosity that marries a decidedly rock aesthetic with the creative demands of a small-group jazz setting.

The text, if you will, is Homer's Odyssey. Many episodes in the epic quest of Odysseus/Ulysses to find his way back home to his beloved Penelope are here—the Scylla and Charybdis, the Cyclops, the lure of the sirens' song. Neither a faithful retelling of the epic poem, nor an ironic appropriation of the Homeric elements (as with James Joyce's novel Ulysses (1922) or the Coen brothers' film O Brother Where Art Thou? (2000)), Lost on the Way uses the original material as a platform for a musical conversation. A final coda, "Des bruits a tisser"—weaving noises—followed by "L'absence," is a reference to Penelope's weaving of a funeral shroud while awaiting her peripatetic spouse. As successfully as any track on the album, the performance weaves the Dolphy and the Davis, with guitarist Delpierre shuttling back and forth between rhythm and melody.