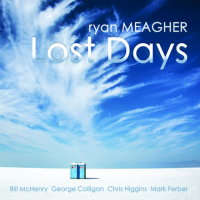 On Lost Days, guitarist Ryan Meagher offers up ten expressive and entertaining compositions that run the gamut from blues to funk and from swing to rock. His compositions are hot and spontaneous—they break apart and fuse back together in kaleidoscopic fashion.

The Portland, Oregon-based Meagher is backed by a talented group. Tenor saxophonist Bill McHenry played with both the late, great Paul Motian and Andrew Cyrille. Keyboard player George Colligan is a professor at Portland State University. Bassist Chris Higgins arrived in Portland by way of Boston, Barcelona, and New York. And drummer Mark Ferber, whose performance on these tracks is impeccable, has jammed with jazz groups in New York for over a decade.

The set begins with the funky blues-rock number "Bayou Brasilera." It lifts off with Meagher's solo, which juts above Colligan's Hammond. Then the organ and sax take turns soloing as Ferber shows off his mastery of the drum kit.

"Absurdly Delinquent" offers up a musical ode to an orange-streaked sunset. There's a sense of sophistication, helped along by Colligan's classy/glassy piano. The playful melody is covered by the sax, piano, and guitar in solos and in unison.

The title cut features Meagher's rockish solo. The song builds in intensity as Ferber drives the music forward and McHenry enters with fluid lines above the rocky atmospherics.

A highlight of the album, "Brook's Little Blues" makes magic when Meagher and McHenry play together. Meagher's guitar solo soars as Higgins walks the bass and Colligan's splashes chords in the background. McHenry's solo adds his own lyricism and his improvisation accelerates via a combination of tonguing and slurring. Then Colligan moves in with a piano solo of funk and blues. Ferber ends the piece with some ripping solos.

"Heart-Whole" opens with a Colligan piano solo that takes flight over Ferber's ever-solid drumming. The theme uses legato phrasing atop Colligan's chords. Meagher, McHenry, and Colligan all solo, each providing their own fascinating improvisations. The joyful tune stretches out like a panorama.

On "South Slope," Meagher, McHenry, and Colligan state the syncopated eighth-note up-and-down theme, and then they offer up solos above the ever-busy Ferber. Bassist Higgins gets a solo here too, and it bounces along happily.

Another friendly blues stroll "Deep Ocean Hall," features Colligan on the Wurlitzer under McHenry's sax solo. McHenry, Meagher and Colligan again solo, their lyrical phrases building one upon the other.

Using a 7/4 meter, "Meagher" is based on the Matt Otto composition "Inner Urge." Meagher, McHenry and Colligan play the theme in unison. Then Meagher breaks out with a sweeping solo echoed by Colligan's piano licks. McHenry follows with an airy solo and Ferber provides explosive flourishes behind the action.

In an interesting twist, Meagher reprises "Bayou Brasiliera." This time around, he gives the song a calypso style with an "anything goes" approach. McHenry's solo bubbles with hooliganism. Colligan does a funky Jimmy Smith rendering on the Wurlitzer. Meagher's solo twangs and stretches.

Lost Days is guaranteed to brighten one's day. Think Ferris Bueller. Time to escape the drudge and get lost in the revelry. One can be forgiven an urge to dance and bump around the room. After all, this is music of the soul. Enjoy!